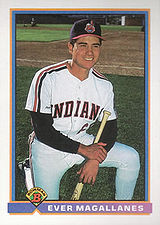 Infielder Ever Magallanes had a cup of coffee in the majors and was later a minor league manager.

After attending Texas A&M University, the Mexican-born Magallanes was selected by the Cleveland Indians in the tenth round of the 1987 amateur draft. He reached the major leagues briefly in 1991, going 0-for-2 in 3 games for the Tribe. He later played in the Chicago White Sox, Texas Rangers, and Arizona Diamondbacks organizations, as well as spending many years in the Mexican League, retiring in 2005.

Magallanes hit .358 in three Caribbean Series. He was named All-Star second baseman of the 1997 Caribbean Series (10 for 19, HR, 2 RBI), beating out Roberto Alomar, and repeated the feat in 1999. He was inducted into the Caribbean Baseball Hall of Fame in the 2013 class.

He moved on to the White Sox organization in 2009, managing the Birmingham Barons for two years. Magallanes moved away from managing to serve as Chicago's minor league infield coordinator from 2011 and into the 2016 season. Mike Gellinger was slated to manage the AZL White Sox in 2016, but Magallanes replaced him before games actually began. In 2017-2018, he worked as the Dominican Republic Academy supervisor. Ever returned to managing the AZL White Sox in 2019 and was supposed to return in 2020 but the minor league season was cancelled due to COVID-19. In 2021 he again was slated to manage the team, but Mike Gellinger moved up from bench coach to the manager's role. It is not known what prompted this change or what role Magallanes played for the remainder of the year. In 2022 he returned to the Los Angeles Angels' organization, managing the Inland Empire 66ers.

Internationally, Magallanes coached for Mexico in the 2009 World Baseball Classic and 2013 World Baseball Classic, and then managed them in the 2014 Central American and Caribbean Games. It also appears he served as a bench coach for the Naranjeros de Hermosillo in the later stages of the 2008/2009 season. He followed that with two partial seasons managing the team, taking over on November 26, 2010 and finishing the season. The next year he returned as manager, but was fired on November 4, 2011.