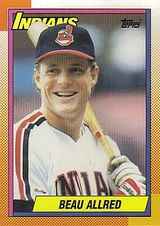 "Witness the Hall-of-Fame-to-waiver-wire story that is charted in graffiti in a Cleveland Stadium men's room. The first line of ballpoint-pen ink, all but weathered away on the wall, reads SHOELESS BEAU ALLRED. The next line, somewhat newer, reads CLUELESS BEAU ALLRED. And the final line, in the freshest ink of all, reads simply CLUBLESS BEAU ALLRED." - Steve Rushin, Sports Illustrated, October 7, 1991

Outfielder Beau Allred played parts of three seasons in the majors, all with the Cleveland Indians.

Selected by the Tribe in the 25th round of the 1987 amateur draft, Allred made his pro debut that summer with the Burlington Indians. He hit .341 with a .617 slugging percentage and .479 on-base percentage, topping the Appalachian League in all three categories. After playing for the Kinston Indians in 1988, he spent the majority of 1989 with the Canton-Akron Indians, for whom he hit .303 with 14 home runs. He finished third in the Eastern League batting race, also leading the club in at-bats (412), hits (125), doubles (22), triples (5) and stolen bases (16). That September, he earned a call-up to the majors, making his debut on September 7, 1989 and hitting .250 in 13 games for Cleveland.

Allred spent most of 1990 with the Colorado Springs Sky Sox, appearing in just 4 June games with Cleveland. In that brief stint, he hit his first big league homer, a two-run shot off Roger Clemens of the Boston Red Sox on June 8th. He was back with the major league club to start 1991 and hit .232 with 3 homers (including one off Dennis Eckersley) in 48 games before being sent back down to Colorado Springs in late June after the Indians acquired Mark Whiten and Glenallen Hill. Allred played the next two seasons at the Triple A level for Cleveland before ending his career with the Richmond Braves in the Atlanta Braves organization in 1994.