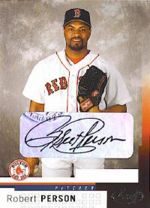 Robert Person, drafted in the 25th round of the 1989 amateur draft, pitched nine seasons in the major leagues and 15 in the minors. His most notable season in the majors was 2001 when he went 15-7 for the Philadelphia Phillies. He was 10th in the National League in ERA in 2000.

On June 2, 2002, pitching for the Phillies against the Montreal Expos, he hit 2 homers including a grand slam off Bruce Chen and drove in 7 runs. He also walked in the game and just missed a third home run as it drifted foul.