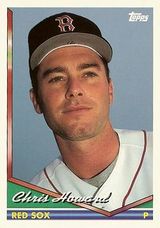 Chris Howard had a short major league career; his most complete season was as a member of the Boston Red Sox in 1994. He joined the team in May and stayed until the 1994 strike ended the season. He had 2 wins and 1 save during his career. The save came on August 6, 1994; he pitched the last 4 innings of a 8-4 Red Sox win over the Cleveland Indians. He finished his career with an impressive 3.13 ERA. On July 9, 1994, Howard became the first major league pitcher to strike out Alex Rodriguez in a regular season game.