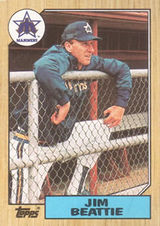 Dartmouth Big Green alum Jim Beattie was a fourth round selection of the New York Yankees in 1975, reaching the majors just under three years later despite a rash of big time free agent acquisitions for the pitching staff, including and not limited to Hall of Famer Goose Gossage, Don Gullett and Andy Messersmith. He earned a World Series ring as a contributor his rookie season, 1978, but, much like many Yankee youngsters in George Steinbrenner's heyday, was shipped out for a "proven" veteran (in this case, outfielder Ruppert Jones) prior to the 1980 season when he failed to immediately establish himself as a star.

After his playing career ended, Jim went on to serve as Farm Director and Director of Player Development for the Seattle Mariners from 1990 to 1995. He moved on to become General Manager of the Montreal Expos from October 1995 to 2001. Next, he was Executive Vice President/Co-GM of the Baltimore Orioles beginning in 2003, sharing duties with Mike Flanagan, another former major league pitcher from the 1980s. He was removed from the position by the O's after the 2005 season. He finished the 2007 season as bullpen coach of the Florida Marlins following the departure of Rick Kranitz. From 2010 to his retirement in 2018, he worked as a scout for the Toronto Blue Jays.

Record as a General Manager[edit]