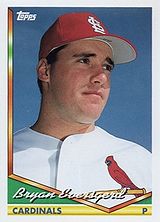 Bryan Eversgerd was signed by the St. Louis Cardinals as an amateur free agent in 1989. He reached the big leagues with the Cardinals in 1994 and pitched 40 times that season, going 2-3, 4.52. In 1995, he was one of three players traded to the Montreal Expos in return for ace pitcher Ken Hill during the team's infamous spring training fire sale. The only one with major league experience among the three (the others were Kirk Bullinger and DaRond Stovall), he was expected to be a big part of the Expos' bullpen, but he fizzled and was sent down to the minors with a 7.36 ERA on May 19th. He went 6-2, 2.38 in 38 games for the AAA Ottawa Lynx and came back to Montreal in September, lowering his season's ERA to 5.14 in 25 games.

After the 2005 season, Eversgerd was traded again, this time to the Boston Red Sox along with Wil Cordero in return for Shayne Bennett, Rhéal Cormier and Ryan McGuire. He spent the entire year in the minors and did not resurface in the big leagues until 1997, by which time he was a member of the Texas Rangers for whom he managed to be saddled with two losses in only 1 1/3 innings spent on the mound. He returned to the Cardinals in 1998 and made his last major league appearances for them, with no record and an ERA of 9.00 in 6 innings.

In 2018, he returned to the Cardinals as their major league bullpen coach, replacing Blaise Ilsley.