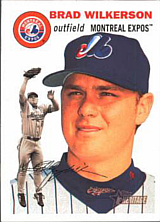 Brad Wilkerson won an Olympic gold medal for the United States in the 2000 Sydney Olympics. He was MVP of the 1995 World Junior Championship, hitting .360 with 7 runs, 8 RBI, 3 doubles and 3 home runs and going 3-0 on the mound with a 0.90 ERA, 11 hits allowed, 3 walks allowed and 26 strikeouts in 20 innings pitched. He drove in the winning run in the semifinals against Australia, then pitched a three-hit shutout against Taiwan to give the US the Gold Medal.

He is often cited as being the last Montreal Expos player because of his appearance during the Major League Baseball Japan All-Star Series shortly after the 2004 regular season wearing his Expos uniform. He was the final winner of the Expos Player of the Year award in 2004. Wilkerson moved with the Expos franchise to Washington. An established starter from his time in Montreal, he was inserted as the leadoff hitter and center fielder on Opening Day for the Washington Nationals on April 4, 2005. He singled to start the contest against the Phillies' Jon Lieber, making him the first National to get a base hit.

Wilkerson was traded on December 7, 2005 from the Washington Nationals to the Texas Rangers with OF Terrmel Sledge and RHP Armando Galarraga for 2B Alfonso Soriano.

Wilkerson retired in 2009 while playing for the Boston Red Sox' Triple-A team, the Pawtucket Red Sox.

Brad hit for the cycle twice in his career: on June 24, 2003 for the Expos against the Pittsburgh Pirates and on April 6, 2005 as a newly minted National against the Philadelphia Phillies.