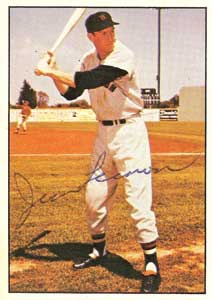 Tall, lanky Jim Lemon was born on March 23, 1928, in Covington, VA. With an erect, wide batting stance and a powerful roundhouse swing, Lemon was a slugging outfielder who teamed with Roy Sievers and Harmon Killebrew to present a formidable home-run trio for the lowly Nats. He twice logged 100 RBI and over 30 homers.

Lemon played professionally for 14 years from 1948 to [[1963], spending twelve seasons in the majors. Signed by the Cleveland Indians as an amateur free agent out of high school in 1948, he broke into Organized Baseball at age 20 with the Pittsfield Electrics in the Canadian American League, and played for Pittsfield and Bloomingdale in the North Atlantic League that year. He then played for the Harrisburg in the Inter-State League in 1949 and the Oklahoma City Indians in the Texas League in 1950.

Lemon was 22 years old when he broke into the big leagues on August 20, 1950 with the Cleveland Indians, and he was on the Cleveland roster when he was drafted into the U.S. Army for the Korean War in 1951. Because he was drafted, he missed the 1951 and 1952 seasons. He married Ella Mae Otto on April 19, 1952 and was discharged that year as well. He spent most of 1953 with the [[Indianapolis Indians of the American Association, however he also made 16 appearances in the big leagues, hitting .174 in 46 at-bats. He started the 1954 season with Cleveland but did not play any games with them.

In his autobiography (with Ira Berkow), Hank Greenberg, then the Cleveland Indians General Manager, mentioned some transactions he made that did not actually benefit the Indians, but benefited the traded player. One such example is when Lemon was sent to the Senators. Jim was a power hitter, and did not fit into manager Al Lopez's plans. Greenberg thought Jim would be better off elsewhere, so he shipped him out. Lemon made the most of the chance Greenberg gave him. The Indians wanted to keep Lemon in the minor leagues in 1954, and in fact optioned him to Richmond of the International League during spring training. The American League then informed the Indians that because Lemon had spent two years in the military they had to ask waivers on him before they could send him down. So Greenberg was forced to re-roster a man he had decided to farm out. It was well considered at the time that Lemon would quickly be claimed if waived.

During that era, teams broke camp with extra players, and May 15 was the deadline for trimming rosters. So Lemon was sold on May 12 of that year because the Indians couldn't demote him freely. They gambled and, as predicted, lost. So, while Lemon might have eventually benefited - it still took him two years to stick with the Senators, who demoted him when they signed Harmon Killebrew as a bonus baby and were forced to keep Killebrew on the roster - the Indians did not trade him, and there's no indication they had his best interests at heart.

Lemon was purchased by the Washington Senators from Cleveland on May 12, 1954. He played for the Charlotte Hornets in the South Atlantic League in 1954 and the Chattanooga Lookouts of the Southern Association in 1955. On July 19, 1955, Lemon set a minor league All-Star game record by hitting four (some sources say five) home runs in the Southern Association All-Star Game. The All-Star system that year pitted the first place team (the Birmingham Barons) against the All Stars of the other teams. Lemon was Chattanooga's All Star, and his four (or five) homers and 7 RBI led the All Stars over Birmingham 10-5. He was called up to stay by the Senators for ten games at the end of the season.

He finally wins a job[edit]

In August 1956, Lemon hit three consecutive home runs off the New York Yankees' Whitey Ford while playing at Griffith Stadium in Washington. The Yankees' Joe DiMaggio was the only player with a three-homer game at Griffith before Lemon's feat, but his were not consecutive. In attendance was President Dwight Eisenhower, who congratulated Lemon on his performance. The Senators nonetheless lost, 6-4.

The Wall (at Fenway Park) has a ladder that enables the ground crew to pluck home run balls from the screen above. It’s the only fair-territory ladder in the majors. One night in the 1950s, Ted Williams and Jim Piersall of the Boston Red Sox converged under a fly ball in left center. To their surprise, the ball hit the ladder and ricocheted toward center, allowing Lemon to circle the bases for an inside-the-park homer.

Lemon knocked in 6 runs in the 3rd inning of the September 20, 1959 game on two home runs, tying two MLB records. Washington scored 10 in the inning to triumph over Cleveland 14-2. His two home runs still stands as a tie for the record. His modern MLB record of six RBIs, held also by Bob Johnson, Tom McBride, Joe Astroth, Gil McDougald, Sam Mele, and Carlos Quintana in the AL and Fred Merkle, Jim Ray Hart, Andre Dawson, and Dale Murphy in the NL was broken by Fernando Tatis. The all-time record for RBIs in one inning was set on September 23, 1890, when Ed Cartwright of the old St. Louis Browns in the American Association had seven RBIs – a record which also fell to Tatis.

Selected for the 1960 All-Star Game, he walked once and struck out once.

The surprising fourth-place Senators fell to a game above .500 on September 18, 1960 when the Red Sox Ted Williams' two-run home run off Pedro Ramos gave Boston a 2–1 win. Billy Muffett allowed just three hits, including Lemon's 38th home run, in a quick one hour 40 minute win. A late collapse—15 losses in the final 18 games—will drop Washington to fifth place, but that will still be the club's best finish in seven years. The club will continue its improvement in Minnesota.

Moving north with the franchise, he played for the Minnesota Twins from 1961 to 1963 but was slowed by injuries in 1961 and 1962. Purchased by the Philadelphia Phillies from the Twins on May 4, 1963, he attempted a comeback. On June 9, 1963, the Phillies scored five runs in the ninth inning on homers by Don Demeter, Lemon and Johnny Callison to tie the Cincinnati Reds 7–7. Philadelphia scored again in the tenth inning to win 8–7.

Purchased by the Chicago White Sox from the Phillies on June 28, 1963, he played his final MLB game and ended his playing career on September 24, 1963 after a major shoulder injury at age 35. On October 18, 1963 he was unconditionally released by the White Sox.

He then managed the York White Roses in the Eastern League for the new Washington Senators and was the Twins' batting instructor from 1965 to 1967. On November 27, 1967, The New York Mets sent Bill Denehy and $100,000 to the Senators for Washington's manager, Gil Hodges. Lemon was named manager of the Senators. He managed 161 games with a record of 65 wins and 96 losses. The team's new owner, Bob Short, then fired Lemon on January 29, 1969 and replaced him with Ted Williams.

Known for his humble professionalism, Lemon did not play during a big-money era and early in his career he would supplement his income by refereeing basketball games during the winter.

Lemon's big-league career didn't really begin until he was 28, and lasted just six full seasons. Of course, in the process of going to Washington, he not only ended up in the minor leagues, again, but he also missed out on the Indians' championship season in 1954. It wasn't until 1965, as hitting coach of the Twins, that he got a sniff of the World Series.

Lemon stood 6'4", weighed at least 200 pounds, and averaged about one steal per 80 games played. Ironically, he reached the major leagues as a centerfielder.

Combining power, speed, and an exceptional arm, Lemon was part of the power group with Roy Sievers, Harmon Killebrew and Bob Allison that made the transition of the Senators to Minnesota a successful one. He spent a total of 26 seasons in the Senators/Twins organization as a player, coach, scout, Minor League instructor, hitting instructor and manager

Lemon left sports and became involved in the restaurant business and was a co-owner and operator of a Hyattsville, MD grocery. He left the Washington area in 1987 and spent many years in Myrtle Beach, SC.

He had blond hair and hazel eyes and his principal hobby was sports. He died at age 78 at his home in Brandon, MS from melanoma - a type of cancer - on May 14, 2006. Survivors included his wife of 54 years, Ella Otto Lemon of Brandon; three children, Joseph Lemon of Lynchburg, VA (a nursing administrator), Le Lemon of Darnestown, MD, and Patrick Lemon of Brandon (an attorney); a brother, William Lemon of Roanoke, VA (a partner with the Martin, Hopkins and Lemon law firm in Roanoke); and seven grandchildren.