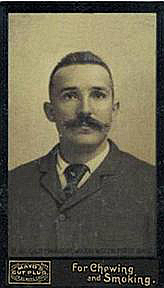 "Gus Schmelz found a 34-year-old named Ed Cartwright who had only played one year in major league baseball - way back in 1890 - and and made him the everyday first baseman. He hit 60 extra-base hits, including 12 homers - a high number for the day." - from the book Evaluating Baseball's Managers, about Schmelz constructing his 1894 Washington Senators

Ed Cartwright played five seasons in the majors during the 1890s. A multi-talented player, he was second in the 1890 American Association in home runs as a rookie, although he appeared in only 75 games, and was seventh in stolen bases in the 1895 National League. He led the 1896 National League in games played and, as a first baseman, led the 1895 National League in assists. Baseball Digest from August 2007 says Cartwright drove in seven runs in one inning while in the majors in 1890.

Cartwright was born in Johnstown, PA in 1859. He was 30 before he came to the majors; he played for years in the minors at places such as Youngstown, New Orleans (he was on the first Pelicans pennant-winning team in 1887) and Kansas City. He was in the minors for part of 1890, and then was back in the minors from 1891-1893. He played on a team of almost all former and future major leaguers with the 1893 Memphis Fever Germs. In 1897, he spent part of the season with Minneapolis.

At age 34, Ed became a regular with the 1894 Washington Senators. He played as a regular for the team from 1894-1896, although when his hitting dropped off, it was the end of his major league days (he was also 37 years old in 1897). In his best season, 1895 with Washington, he hit .331 and slugged .494. Both marks were second-best among regulars on the team. The book A Game of Brawl: The Orioles, the Beaneaters, and the Battle for the 1897 Pennant says that Schmelz offered Cartwright early in the 1897 season to Frank Selee, the Boston manager, in exchange for first baseman Fred Tenney, but sensible Selee declined. Tenney, a good young player, continued to play through 1911.