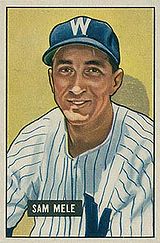 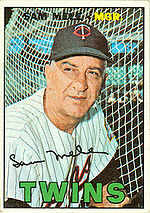 Outfielder Sam Mele played a decade in the majors and later managed the Minnesota Twins for parts of seven seasons.

The nephew of big leaguers Tony Cuccinello and Al Cuccinello, Mele grew up in Queens, New York, and attended New York University, where he played basketball. He was signed by the Boston Red Sox in 1946. Playing for the Scranton Red Sox that summer, he went on to lead the Eastern League with a .342 batting average and 18 triples. The following year, 1947, he reached the majors, starting in right field on Opening Day. As part of an outfield that included Ted Williams and Dom DiMaggio, he hit .302 with 12 home runs and 73 RBI in his rookie campaign.

After being traded to the Washington Senators during the 1949 season, Mele led the American League with 36 doubles in 1951, while driving in a career-high 94 runs. Over the next six years, he played for the Chicago White Sox, Baltimore Orioles, Red Sox again, Cincinnati Reds, and Cleveland Indians. During ten years in the majors, he reached double figures in homers five times. Following his big league days, he played two more seasons in the minors.

After his playing days, Mele was a Senators coach in 1959 and 1960. He remained a part of their staff in 1961, when the club moved and became the Minnesota Twins, and ended up replacing Cookie Lavagetto as the team's skipper later that season. His 1965 Twins won 102 games and went to the World Series, losing it in seven games to the Los Angeles Dodgers. Over seven seasons at the helm, he posted a 524-436 record.