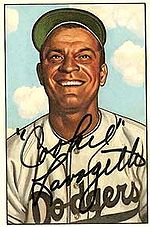 A graduate of Technical High School in Oakland, CA, he was signed as an amateur free agent by Bill Hinchman of the Pittsburgh Pirates in 1933. He married Mary Katherine Poggi on April 10, 1945 with whom he had two sons, Michael (Brother Xavier of the Christian Brothers) and Ernest.

He retired in 1967. He later assisted his wife with her therapy equipment business. His hobby was playing golf. Lavagetto died at age 77 at his home in his sleep from a heart attack, survived by his wife and two children, and is buried at Holy Cross Cemetery in St. Helena, CA.

A dependable regular, Lavagetto's moment of fame came in Game 4 of the 1947 World Series, when he hit a pinch hit double against Bill Bevens of the New York Yankees with two out in the 9th inning, to break up a no-hitter and win the game for the Dodgers in his next-to-last plate appearance in the major leagues. (JK)

Lavagetto was the first of only two players to end a World Series game with a hit when his team was one out away from losing the game: it was in 1947, as described above. Kirk Gibson was the second such player, in 1988.