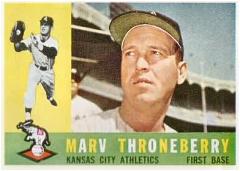 Marv Throneberry became quite a celebrity in spite of his hitting. In reality, though, his 97 OPS+ wasn't much below average and he had over 200 minor league home runs. In the minors, he was the 1956 MVP of the American Association with the Denver Bears, hitting 42 home runs. The next year he hit 40 home runs.

Born in Tennessee, he was signed by the New York Yankees at the age of 18 in 1952. He made it to the big leagues in 1955 for one game, and then was a part-timer in 1958 and 1959. After parts of two seasons with the Kansas City Athletics and parts of two seasons with the Baltimore Orioles, he came to the New York Mets in May 1962. Even though he wasn't there at the very start, he became a symbol of the hapless Mets who lost 120 games that year because of his propensity for making bizarre mistakes on the field. His 17 errors in fewer than 100 games at 1B tell part of the story, but these were added to countless baserunning errors and other miscues that left manager Casey Stengel (and fans) famously wondering "Can anybody here play this game?"

To be fair to Throneberry, though, his 16 home runs were second highest on the squad, and his .244 batting average was higher than the team average. He appeared in only 14 games in 1963, as he and the management couldn't agree on a salary.

Many years later, Throneberry came back to the public consciousness in a series of popular beer commercials that featured ex-sports figures.

He is the brother of Faye Throneberry.