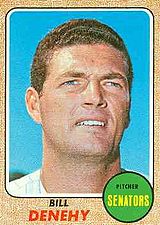 Bill Denehy was the coach of the University of Hartford from 1985 to 1987, being fired for "derogatory public comments".