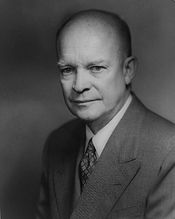 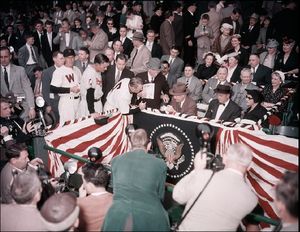 Dwight David Eisenhower was the Supreme Allied Commander during the World War II D-Day invasion and was later elected President of the United States. It is often said that before his time in the military, Eisenhower played the 1911 season in the minors under an assumed name (Wilson) in order to maintain his amateur eligibility. The Wilson who suited up for the Junction City Soldiers of the Central Kansas League in 1911 was likely the future president. He hit .355 in 9 games and was just earning a bit of pocket money before heading to college, at the United States Military Academy. He had been a very decent centerfielder in high school, playing alongside his older brother Edgar.

While at the military academy, Eisenhower once played baseball against Jim Thorpe, who was at the Carlisle Indian School. However, he hurt his knee playing football and did not make the varsity baseball team. His earlier stint in the pros could have gotten him in trouble and potentially discharged from the army, however, so Ike remained reticent to mention it for the rest of his life.

Eisenhower was made honorary president of the Spanish baseball federation in 1960.

"When I was a small boy in Kansas, a friend of mine and I went fishing and as we sat there in the warmth of the summer afternoon on a river bank, we talked about what we wanted to do when we grew up. I told him that I wanted to be a real major league baseball player, a genuine professional like Honus Wagner. My friend said that he'd like to be president of the United States. Neither of us got our wish." - Dwight Eisenhower