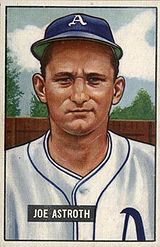 "Joe Astroth, our catcher, was more of a leader -- but maybe he was more of a clubhouse lawyer than a leader. Actually, what he was, was a talker. Whether voicing an opinion or working with a player, he would talk, talk, talk." - Joe DeMaestri, in Danny Peary's 1994 book We Played the Game

Catcher Joe Astroth played parts of ten seasons in the American League, all for the Philadelphia/Kansas City Athletics. Blessed with a strong throwing arm, he retired with one of the all-time best "caught stealing" percentages of 49 percent -- and an incredible 72 percent in the 1953.

Following high school, Astroth went to the University of Illinois, where future big leaguer Hoot Evers was a teammate. During World War II, he served in the Coast Guard from 1942 to 1945. Following his discharge, he was signed by the Athletics and went straight to the majors. He made his big league debut on August 13, 1945, entering the game against the Chicago White Sox as a pinch-hitter. In 10 late-season games that year, he went 1-for-17 with 1 RBI. After playing most of 1946 and all of the following two years in the minors, Astroth was back with Philadelphia in 1949 as a backup to catcher Mike Guerra. He only got into 39 games in 1950, but he made the most of a September 23rd start against the Washington Senators. In the 6th inning of that game, he drove in 6 runs: first with a grand slam (his only home run of the year and his first in the majors) and then with a two-run single.

Astroth became a regular behind the plate for the Athletics in 1952 and saw pretty consistent playing time over the next four years. In 1952, he drove in a career-best 36 runs, and the following summer, in 1953, he hit .296. The Athletics moved on to Kansas City in 1955, and he hit 5 home runs that year. However, he got into just 8 games for Kansas City in 1956, making his final big league appearance on May 13th. He continued to play in the minors until 1958.

Astroth and Spook Jacobs threw out the first ball at Veterans Stadium for a game on June 18, 2002.