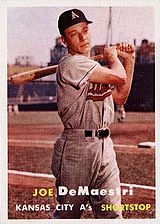 Before the 1946 season, shortstop Joe DeMaestri was signed by the Boston Red Sox as an amateur free agent. The 18-year-old would carry the nickname "Oats" for his entire baseball career due to a family friend hanging it on him early in his youth because of his pronounced blond hair. "Oats" was first assigned to the class C El Paso Texans. He appeared in 76 games and hit for a .264 average.

"Oats's" game spoke for itself and also to the Chicago White Sox who drafted him from the Red Sox in the 1950 Rule V Draft. DeMaestri saw his first big league pitch on April 19,1951, when he faced St. Louis Browns pitcher Bill Kennedy. "The first five games I started in the big leagues, I got a hit in my first at bat," remembered the former shortstop.

With the White Sox, DeMaestri played for Paul Richards, whom he rated as the best manager he ever played for. "He was three innings ahead of everybody else during the ball game," he said. Joe had a so-so rookie year with the Sox, getting into 56 games and hitting .203 and fielding at about the same pace in the infield.

"Oats" was with the Browns for the 1952 season, and had the pleasure of playing for Rogers Hornsby and a seventh-place club that finished 64-90, 31 games back. Joe was not the best himself. He appeared in 81 games, hitting .226 and fielding .939 at the shortstop position. The Browns chose to give him back to the White Sox and on October 16th he was traded with Tommy Byrne to the White Sox for Hank Edwards and Willy Miranda. The ink was barely dry on that agreement when the White Sox sent him along with Ed McGhee and Eddie Robinson to the Philadelphia Athletics for Ferris Fain and Bob Wilson.

As luck goes in baseball, bad for the one, good for the other, Joe stepped into a spot where the Athletics' regular shortstop Eddie Joost had injured his knee in 1953 and became the A's starter for the next seven years. A modest .236 hitter who didn't cause sleepless nights for opposing pitchers, "Oats" had Mike Garcia's number though. Twice in the span of three weeks during the 1954 season, he collected the only hit in the game off the "Big Bear." "Both hits were identical," recalled "Oats. "I hit two line drives right by his head."

In a game on July 8, 1955, Joe had six singles in six at-bats against the Detroit Tigers. A member of the All-Star squad in 1957, he led all shortstops in fielding percentage that season and again in 1958. The last of the Philadelphia Athletics players to still be with the team in Kansas City, he was part of the trade on December 11, 1959 that sent Roger Maris and Kent Hadley to the New York Yankees for Don Larsen, Hank Bauer, Norm Siebern and Marv Throneberry.

In 1960, Joe got into only 49 games and hit .229 for the Yankees, playing as a back-up for Tony Kubek. In Game 2 of the World Series against the Pittsburgh Pirates, Joe singled off the bench and scored a run in the Yankees' 16-3 rout. In Game 7, he replaced Kubek at short in the 8th inning after Tony was hit in the throat by a ground ball of the bat of Bill Virdon.

1961 was DeMaestri's last year in professional baseball. In his backup role, he appeared in only 30 games and hit for the lowest batting average of his career, a docile .146 in 41 at-bats. However he was around for one of baseball's most historic moments on October 1st, when Roger Maris hit his 61st home run of the season to break Babe Ruth's single-season record of 60. "Oats", along with Kubek and Moose Skowron pushed Maris out of the dugout to make a curtain call, which at that time was an unusual practice.

Following his playing days, DeMaestri had a beer distributorship with Anheuser Busch for 33 years before it was sold in 1991.