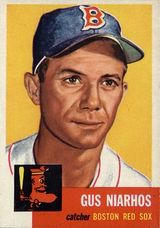 Gus Niarhos was a catcher for 9 seasons in the majors, mostly as a backup.

He was a three-sport athlete at West End High School in Birmingham, AL. He was attending Auburn University on scholarship when he was signed by a scout for the New York Yankees. After World War II broke out, he served in the Navy.

Gus spent his first 3+ years in the majors with the Yankees. Yogi Berra was the up-and-coming catcher, and in 1948 Gus platooned at catcher with him while Yogi also played in the outfield. He appeared in one game in the 1949 World Series, which the Yankees won.

After his playing career ended, he managed in the minors for many years and was a Kansas City Athletics coach from 1962 to 1964. He was Midwest League manager of the year in Burlington in 1965.