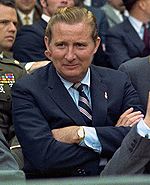 Bob Short is between Richard Nixon (with baseball glove) and the man with "New York" on his uniform. Shown in 1969.

Bob Short bought the Washington Senators in 1968 (despite a bid from comedian Bob Hope) and hired Ted Williams as manager in 1969. After the 1971 season, claiming he was losing tons of money, he moved the team from Washington, DC to Arlington, TX, where they became the Texas Rangers and upset many fans in the process. After the move, he sold them in short order to Brad Corbett, making a nifty profit.

Short also owned the NBA's Minneapolis Lakers and was responsible for moving the club to Los Angeles. Additionally, he was involved with the Democratic Party in Minnesota and a candidate for the Senate in 1978.