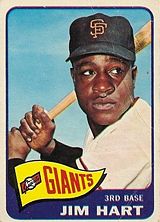 "His power is beyond our fondest expectations. - coach Hank Sauer

Stocky Jim Ray Hart was a slugging third baseman during the second dead-ball era who played most of his Major League career with the San Francisco Giants. A gifted hitter (career .278) with great power and a long, looping swing, he struck out less than most sluggers. Hart's shortcoming was his fielding, which relegated him to the minors for some prime years of his career. In today's game, he would would have been the ideal designated hitter.

Hart, as the regular third baseman in 1964, hit 31 home runs, his career high. He tied Orlando Cepeda on the team for the second-most home runs, with Willie Mays leading the team with 47 while Willie McCovey had 18 in 364 at-bats. Through 1968, Hart hit at least 23 home runs each year, and posted batting averages that were comfortably above the league average each year.

Defensively, he made more errors than the average third baseman, and as he got older, his range began to slip below average as his weight increased.

The Giants Encyclopedia also says that injuries started taking their toll. He had been hit on the shoulder by Bob Gibson and beaned by Curt Simmons as a rookie in 1963, and in the late 1960s suffered a shoulder injury.

Starting in 1969, he had much less playing time and showed less power, and Davenport, who was an outstanding fielder even if not much of a hitter, won back the third base job. Hart had split his time between third base and outfield in 1967 and 1968 and in 1969 played almost exclusively in left field. He moved back primarily to third base in 1970 where Al Gallagher was the regular, while Davenport finished out his career as a back-up. Hart spent a good part of that season back in the minors with the Phoenix Giants. Managed by none other than Jim Davenport, he also played there briefly in 1971, and for most of the 1972 season, hitting over .300 and slugging over .500 each year.

He was in one All-Star Game, in 1966, and appeared once in post-season play, going 0 for 5 in the 1971 NLCS. One of the most similar players according to the similarity scores method, Bob Horner, is an interesting comparison.