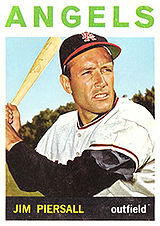 "Probably the best thing that ever happened to me was going nuts. Whoever heard of Jimmy Piersall, until that happened?" - Jimmy Piersall

Jimmy Piersall was a gifted, high-visibility player who had a long career in the major leagues; a minor star who intrigued and enchanted both fans baseball people with his natural, all-around athleticism, and sometimes erratic behavior. He was good hitter and excellent fielder with a strong arm and above-average speed; he was one of the few American athletes whose battle with mental health issues was well documented in the 1950s. With that, he eventually figured out that those past issues would allow him the freedom to sometimes act eccentric and zany -- which further endeared him to fans.

Piersall was signed by the Boston Red Sox in 1948, and broke in for 6 games in 1950. There wasn't much room for him to stick, with Vern Stephens at shortstop hitting 30 home runs, and Ted Williams, Dom DiMaggio, and Al Zarilla in the outfield all hitting around .320.

He came back up in 1952, playing 30 games at shortstop and 22 in the outfield. He had always played the outfield in the minors, but manager Lou Boudreau decided to make him a shortstop that spring and he didn't do badly, but eventually went back to his natural position. However, his behavior, both on and off the field, was erratic, and he was sent back down to the AA Birmingham Barons, where he continued to puzzle management with his antics. He was eventually hospitalized with a full mental breakdown, missing the second half of the season as a result. The next year, 1953, he became a regular in the outfield, as DiMaggio and Zarilla had aged, and Williams was off most of the season serving in the military. Piersall remained a regular in the outfield through 1958. He had very good range defensively, and while he was not a tremendous hitter, he showed moderate power.

He led the American League in doubles in 1956, and was occasionally among the leaders in other offensive categories. He got votes for the MVP Award several times, finishing as high as 9th in 1953. He won a Gold Glove in 1958.

Moving to the Washington Senators for 1962, he had another off-year. In 1963, he played for three teams: for the Senators, for the New York Mets (he was traded for Gil Hodges), and after being released by the Mets, for the Los Angeles Angels. He was to spend the rest of his career with the Angels. In 1964, he hit .314 in 87 games with the Angels.

Similarity scores show the most similar player as journeyman Dave Martinez, but Piersall was almost certainly a better offensive and defensive force than Martinez. Detroit's Johnny Groth, who played during the same era, compares favorably to Piersall.

He was the subject of the movie Fear Strikes Out, based on his autobiography, published in 1955. He was a coach for the Texas Rangers in 1975. He was a radio and television broadcaster for the Chicago White Sox from 1977 until 1981, teaming up with Harry Caray most of that time, although in 1977, he teamed with Mary Shane, the first female announcer in baseball history, for radio and television broadcasts.