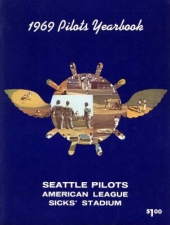 The 1969 Seattle Pilots were the only edition of the expansion Seattle Pilots to play in the Pacific Northwest. After finishing in last place in the AL West, they moved to Milwaukee, WI before the start of the 1970 season. Nevertheless, the Pilots secured a place in baseball history because the team's travails were described in humorous detail by pitcher Jim Bouton in his classic book, Ball Four which came out in 1970.

Major League Baseball awarded Dewey Soriano and Max Soriano an expansion franchise at the 1967 Winter Meetings in Mexico City on the condition King County would build a domed stadium. In 1968, after a round of public appearances by American League president Joe Cronin, and players Mickey Mantle, Jimmy Piersall and Carl Yastrzemski, King County voters approved the construction of a domed stadium. But in the menatime, the Pilots would need to play in outdated Sicks Stadium, a minor league ballpark which was quickly and shoddily expanded to hold more fans.

The Seattle Pilots' first pick in the expansion draft was Don Mincher, and they became one of four expansion franchises the began play in 1969.

The Pilots won their first game on April 8th against the California Angels, but there were very few other bright spots to the season. Nevertheless, the team managed to stay in reasonable striking distance of a .500 record for the first three months of the season, and were only 6 games back of the division lead (in third place in the AL West) as late as June 28th. But a disastrous 9-20 July and an even worse 6-22 August ended even a faint hope of any kind of contention, and the team finished in last place with a record of 64-98.

In terms of individual accomplishments, Tommy Harper led the American League with 73 stolen bases, Mincher clubbed 25 home runs and made the All-Star team as an injury replacement for Mike Hegan who hit .292 with a .427 OBP. Reliever Diego Segui went 12-6 with a respectable 3.35 ERA. However, only two other regulars (Tommy Davis and Steve Hovley) had a batting average above .250 and no starting pitcher posted an ERA below 4.00. The team's mediocrity, coupled with an inadequate 31-year-old ballpark, led to a per-game attendance of little more than 8,000.

Also, the Pilots had no television deal with any local broadcasting station at the time, which also helped lead to the team's demise when television was becoming a key marketing tool for teams and source of revenue. Former part-owner Max Soriano said about the cost of broadcasting rights: "The cost of the A.T.& T line was such that we couldn't get advertisers to come forth. There wasn't any revenue for the ball club by the time you paid the telephone charges."

Add that along with former Cleveland Indians owner William Daley, who the Sorianos met in 1965 when the Indians were considering moving to Seattle, told Seattle officials they had one year to prove themselves or lose the team, withdrew his support for the Pilots. Daley's threat worked as city officials, the Pilots, and local creditors all argued over money owned by Pilots management due to delays to construction to the domed stadium or from lawsuits which later led to the Pilots filing for bankruptcy.

As a result, the bankrupt team was sold to a group led by Milwaukee businessman named Bud Selig for $10.8 million and moved during spring training to become the Milwaukee Brewers. 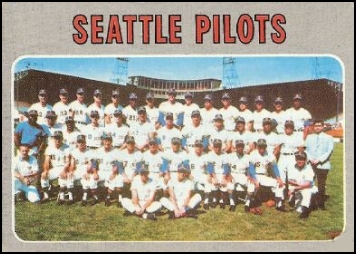