Note: This page is for 1960s All-Star OF-1B Tommy Davis; for others with the same name, click here 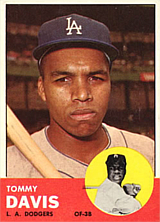 Signed by the Brooklyn Dodgers in 1956, Davis won the Midwest League batting crown in 1957, when he hit .356 for the Kokomo Dodgers, and was the top hitter in the Pacific Coast League in 1959, when he batted .345 for the Spokane Indians. He earned a cup of coffee with the Dodgers, now in Los Angeles in 1959, striking out in his only plate appearance. Nonetheless, he earned a regular spot in the club's outfield the next year, and after hitting .276 with 11 home runs, he finished fifth in 1960 National League Rookie of the Year Award voting.

Beginning in 1961, the Dodgers tried to turn him into a third baseman, with largely unsuccessful results: over the next three years, he played 138 games at the position but barely fielded above .900. However, he was highly successful at the plate during this time. In 1962, he led the NL with a .346 average, 230 hits, and 153 runs batted in. His RBI total (partly due to Maury Wills stealing over 100 bases that season) stands out as a notable accomplishment in a decade when not many runs were scored, and it was the highest total between 1950 and 1997. He hit .326 to win another batting title in 1963 as Los Angeles reached the World Series. He went on to hit .400 in that year's Fall Classic as the Dodgers swept the New York Yankees. 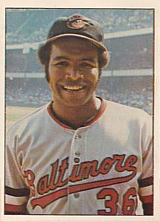 On May 1, 1965 (boxscore), Davis suffered a severely broken ankle, causing him to miss most of the season and affecting him for the remainder of his career; while he was still a high average hitter after his return, he lost most of his power. He did bounce back to hit .313 in 100 games in 1966 and went 2-for-8 in that fall's World Series loss to the Baltimore Orioles. Following that season, he was traded to the New York Mets.

Davis did play for good teams in the second part of his career as well, including division winners with the Oakland A's in 1971 and the Baltimore Orioles in 1973 and 1974, where he was the first full-time designated hitter in the team's history. Although he is best remembered for his play with the Dodgers, he hit over .300 with Oakland in 1971 and Baltimore in 1973. He played for ten teams in his career, hitting over .300 for four different teams and compiling a lifetime .294 batting average during a period that has been called the second dead-ball era.

His .320 batting average as a pinch hitter is the highest of any batter with at least 150 at bats in the role, tied with Alex Arias. Based on similarity scores, the most similar player to Davis is his contemporary Felipe Alou.

After his retirement as a player, Davis was hitting coach for the Seattle Mariners in 1981, with his old teammate Maury Wills as manager.