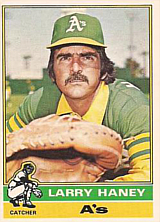 Larry Haney was a backup catcher for most of his 12-year major league career. Although he was only briefly in one World Series (in 1974), he was often on good teams.

The Seattle Pilots picked Haney in the expansion draft, and he spent not quite half a season as an original Seattle Pilot in 1969 before being traded to the Oakland Athletics. He appeared with the Athletics in games in 1969 and 1970 and from 1972 to 1976, but he was also purchased a couple of times by other teams during that period (eventually being sold back to the Athletics each time), and appeared in two games with the St. Louis Cardinals in 1973. The Athletics won their division each year from 1971 to 1975, but Haney's only appearance in the postseason was in 1974. He finished out his career with the Milwaukee Brewers in 1977 and 1978.

After his playing career ended, Haney was a Brewers coach for over a decade. He then became a senior special assistant to the general manager of the Brewers. His son, Chris Haney, also played in the major leagues. His brother, George Haney, was a pitcher in the New York Yankees system from 1959 to 1963.