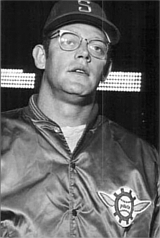 "[Jim] Pagliaroni says that one of the great things about Gene Brabender as a pitcher is that he's big enough to intimidate hitters with his size. 'He looks like if you got a hit off him,' Pag said. 'he'd crush your spleen.' - Jim Bouton, Ball Four

Gene Brabender grew up on a farm in Black Earth, WI, which helped develop his immense natural strength. He was originally signed by the Los Angeles Dodgers and missed the 1964 and 1965 seasons due to military service. The Baltimore Orioles selected him in the 1965 Rule V Draft after spotting him as the star pitcher for his military post, Aberdeen Proving Ground.

He won a World Series ring in 1966, making 31 appearances as a rookie with a 4-3 record and 3.55 ERA. After two more solid years, one exclusively as a starter and one as a swingman, Baltimore traded Brabender to the Seattle Pilots near the end of spring training in March 1969. He was the expansion club's leading winner, finishing 13-14 with a 4.36 ERA and 139 strikeouts (but 103 walks) in 202 1/3 innings. When the Pilots became the Milwaukee Brewers, Brabender had the distinction of being the first native-born Wisconsinite to play for the team, pitching in their inaugural 1970 season to a 6.02 ERA in 128 2/3 innings He was traded to the California Angels organization after a sore shoulder plagued him, but the injury limited him to just 27 ineffective minor league innings in 1971. He quit after a last effort in spring training 1972.

Brabender continued to live in Wisconsin after retiring from baseball, returning to the Black Earth area in 1978. He worked in construction, mainly by himself. When Jim Bouton began casting for his Ball Four sitcom on CBS, he brought in Gene to audition for the role of "Rhino" Rhinelander, based on him. But Gene did not look as imposing in his screen test as he did taking the bump with the Pilots and the role went to former NFL star Ben Davidson.

Gene died in a Madison, WI, hospital in 1996, after collapsing from a brain aneurysm. He was 55.