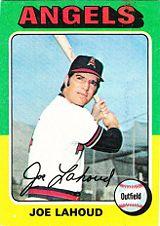 Joe Lahoud is one of the few Major League players of Lebanese-American origin. He is a member of the Maronite Christian Church. He played much of his career in the second dead-ball era, and while his batting averages were low, he made up for it to a large extent with good ability to draw walks and with some power during the prime of his career.

According to similarity scores, the most similar player is his contemporary Roger Repoz. He was signed by famed scout Bots Nekola.

He was kicked off the New Haven College baseball team for insubordination (mouthing off to his coach.)

Lahoud was caught in the middle of the infamous Tony Conigliaro vs. Carl Yastrzemski feud that went on in the late 1960s and early 1970s with the Boston Red Sox. He was very close to Yastrzemski, but got on well with Tony C., also. After the 1970 season, Conigliaro was traded to the California Angels, but the feud continued. Eventually, Lahoud got crossways with Tony's little brother and fellow Red Sox Billy Conigliaro, partly because both were competing for a spot in right field. In an ironic development, they both found themselves traded to the Milwaukee Brewers for the start of the 1972 season.