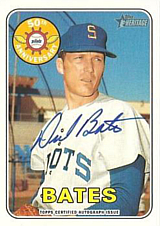 "Dick Bates got called up today. Not me, not Darrell Brandon. Dick Bates. We were sitting around the hotel pool when Sheldon arrived and asked us if we'd heard about Bates. When he told us, at first I thought he was kidding. Then I got pissed off. I was sure I'd be next. You just can't tell what goes through their minds up there, though." - Jim Bouton, while slumming it in Triple A, Ball Four

Dick Bates experienced a short cup of coffee in the bigs in 1969 for the Seattle Pilots. His only game came on April 27th against the Oakland Athletics. Coming in to relieve Mike Marshall - who had already given up five runs - in the 6th inning with no men on and no outs, Bates allowed a home run to the very first batter he faced, Rick Monday. He did manage to strike out the next two batters - Dick Green and Dave Duncan - and then forced opposing pitcher Rollie Fingers to ground out.

He was fairly unimpressive in the 7th inning. First, he walked Bert Campaneris, who stole second. He struck out Tommie Reynolds, so at that point the Athletics had a man on second with one out. Reggie Jackson grounded out, so it looked like Bates was going to be able to get through the inning unscathed. But he went on to walk Sal Bando and allow a double to Danny Cater, which drove Campaneris home. Monday - who had already homered - hit a double which drove in Cater. Before he could get the third out, John Morris was called in to relieve him. The Athletics beat the Pilots in the game, 13-5. Bates' career ERA was 27.00.