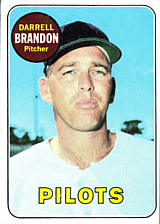 "I purchased a glove from my first roommate in pro ball, Bucky Poodry. It had Bucky written across it. The following year, my teammates Cliff Davis and John Harms of the Houston Colts made fun of it. These guys used to turn the glove inside out and kick it like a football. It was old and the insides were all eaten up. My nickname came from that glove." - Darrell Brandon, for Baseball Nicknames

(note: this was the Modesto Colts, not the Houston Colts, that are being referred to)

Darrell "Bucky" Brandon was a once heralded prospect turned journeyman reliever in parts of seven big league seasons. He started out in the big leagues with the Boston Red Sox from 1966 to 1968 before splitting 1969 with the Seattle Pilots and Minnesota Twins. He re-emerged with the Philadelphia Phillies from 1971 to 1973, going 7-7 with a 3.45 ERA for the woeful 1972 squad.

In 1989, Brandon played for the Winter Haven Super Sox of the Senior Professional Baseball Association.

In the minors, Bucky pitched one game in 1959 for the Selma Cloverleafs. He spent 1960 as an outfielder/third baseman for the Dothan Cardinals, pitching only 5 games. He was out of organized ball in 1961, then returned in 1962 as a pitcher in the Houston Colt .45s organization, with the Modesto Colts of the California League.