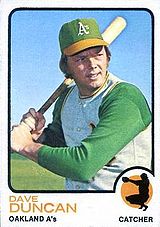 The father of Chris and Shelley Duncan, Dave Duncan was a stellar defensive receiver, and an extremely light hitter, who is better known as a long-time major league pitching coach. While he hit only .214 in the major leagues, he did hit 46 homers for the Modesto Reds in 1966, which established the California League record at the time. He also showed decent power in the major leagues, despite the low batting average, with six consecutive seasons in double figures in homers and a career-high of 19 in 1972. He was a member of the Oakland Athletics' World Championship team that season, although he gave way to Gene Tenace in the World Series. After that season, he was traded to the Cleveland Indians with OF George Hendrick in return for C Ray Fosse and SS Jack Heidemann, in what was a blockbuster trade.

He was the Indians' starting catcher in both 1973 and 1974, then was traded to the Baltimore Orioles in another big deal, this one involving 1B Boog Powell and P Don Hood heading to the Tribe. Duncan finished his career with two seasons as the Orioles' primary catcher in 1975 and 1976. His batting averages in his last three years were .200, .205 and .204. His power deserted him in 1976, when he hit only 4 homers and the Orioles traded him to the Chicago White Sox for OF Pat Kelly. Kelly would be part of two World Series teams for the O's, but Duncan was released by the Pale Hose at the end of spring training in 1977, ending his playing career.

He was a member of the Cleveland Indians coaching staff from 1978 to 1981 and the Seattle Mariners pitching coach in 1982. He was on the coaching staff of Tony LaRussa with the Chicago White Sox (1983-1986), the Oakland Athletics (1986-1995), and the St. Louis Cardinals (1996-2011). He was absent from the Cardinals for the final weeks of the 2011 season, tending to his ailing wife, but returned for the season finale, which could have been LaRussa's final game as a big league skipper. When the Cardinals miraculously made it into the postseason, he stayed on for the length of the playoffs, all the way until their surprising seven-game triumph in the 2011 World Series. After LaRussa's retirement that offseason, Duncan was scheduled to return to the Cardinals in 2012, but in early January, he announced that he was taking an indefinite leave of absence to be with his wife, who was suffering from a brain tumor. Jeanine passed away a year and a half later, in June of 2013.

He returned to the game in 2014, when he was appointed by the Arizona Diamondbacks as a special assistant to the General Manager and pitching consultant, explaining that he needed to be active once again after taking two years to be continually by his wife's side. In 2018, he joined the Chicago White Sox front office as a consultant, working on evaluating pitchers in the organization. Chris, his first son to reach the bigs, passed away in 2019 after a battle with glioblastoma.