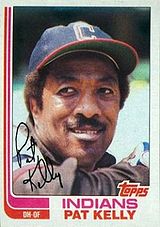 Outfielder Pat Kelly came from an athletic lineage. His older brother, Leroy Kelly, was a Hall of Fame running back for the Cleveland Browns. His brother-in-law, Andre Thornton, was an All-Star for the Cleveland Indians in the 1980s.

Kelly was a Minnesota Twins farm hand for five seasons, starting in 1963 and eventually getting brief trials with the big league club in 1967 and 1968. With players like Bob Allison and Tony Oliva ahead of him on the OF depth chart Kelly was left exposed to the 1968 expansion draft where he was selected in the 34th round by the Kansas City Royals. He became a starter with those first two Royals squads, leading the team in stolen bases in both 1969 (40) and 1970 (34). Kelly was the first player Roland Hemond acquired after becoming General Manager of the Chicago White Sox in the 1970 offseason.

Kelly drew a walk every 8.4 plate appearances and stole 250 bases in his career.

Known throughout his career for his religious beliefs, he became a minister in Maryland after his retirement. He died of a heart attack on October 2, 2005.