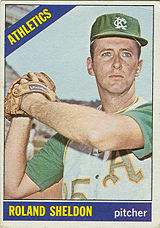 Rollie Sheldon pitched five years in the majors. He had a winning record in his first four years.

Although overshadowed by the home-run hitting contest put on in 1961 by Roger Maris and Mickey Mantle, Sheldon had a fine rookie season for the New York Yankees that year, going 11-5.

He was mentioned in Sweet Seasons by author Dom Forker.