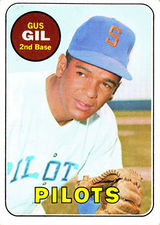 Infielder Gus Gil played four years in the major leagues. He was a frequently-used back-up on the Seattle Pilots in 1969.

Gus was born in Venezuela in 1939, and came to the majors following in the footsteps of other Venezuelans such as Vic Davalillo, who broke in four years earlier, and Cesar Tovar, who came two years earlier than Gus. According to a Baseball Digest article from July 1968, Gus managed to get Tovar signed because the Cincinnati Reds wanted Gil and were willing to sign Tovar to make Gus happy.

In the 1959 Central American and Caribbean Games, Gil hit .350 and slugged .500 for the Venezuelan national team that won a Silver Medal. He fielded .935 as a 2B-3B, joined on the infield by Argenis Gil. Gus was 8th in the event in average (between Tomás Domás Morales Medina and Rafael Ocasio) and slugging, tied for 9th in RBI (7, even with David Elio Inojosa and Francisco López) and tied for 3rd in runs (10, tied with José Flores (Venezuela)|José Flores]]). He was signed by the Reds in 1959 and played for their farm clubs through 1966. He didn't show much power but he always hit over .250.

After the 1966 season, the Reds sold him to the Cleveland Indians, who gave him his major league debut in April 1967. He appeared in 51 games at the major league level that year, and 42 in the minors with the Portland Beavers.

Gus played for Portland in 1968, and then was acquired by the California Angels, who put assigned him to the Seattle Angels. He appeared in 135 games that year.

The Seattle Pilots then made him a frequently-utilized infielder on their inaugural team in 1969. He played third, second and short for the team.

Seattle became the Milwaukee Brewers after one season and in 1970 Gil was in 64 games for the team. He hit under .200, though, and spent part of the season at Portland, where he hit .290. In 1971 he was with the Evansville Triplets for 31 games, hitting .352, and came up to play 11 more games for the Brewers.

He continued to play in the minors through 1975 in the organizations of the Houston Astros, San Diego Padres and Los Angeles Dodgers. Later, he managed four years in the minors.