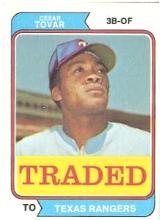 "I went to see Gus Gil in a morning workout. He insisted on bringing Tovar along. Gil was the man we wanted . . . He wanted his buddy Tovar signed, too. . . I signed Tovar to get Gil." - Gabe Paul, quoted in the July 1968 issue of Baseball Digest, about how he signed Cesar Tovar on New Year's morning, 1959

Versatile Cesar Tovar played a dozen seasons in the majors, most notably with the Minnesota Twins. He once appeared at all nine positions in a single big league game, and he led the American League in doubles, triples, and hits at different points in his career.

Originally signed by the Cincinnati Redlegs, Tovar led the Pacific Coast League with 115 runs scored while playing for the Dallas-Ft. Worth Rangers in 1963. After the following season, he was dealt to the Twins for Gerry Arrigo. He made the Minnesota Opening Day roster in 1965 but spent most of that summer with the AAA Denver Bears.

Tovar stuck in the majors for good in 1966 but spent much of the next three summers as a utility man, seeing considerable playing time in the outfield, at third base, and at second. He led the AL in at-bats in 1967 despite not seeing regular playing time at any one position. In a September 22, 1968 contest against the Oakland Athletics, he played all nine positions in a single game, the second big leaguer to accomplish the feat, after Bert Campaneris did it three years prior. He started the game on the mound, ironically facing Campaneris as the leadoff hitter, and gave up one walk while striking out Reggie Jackson in one inning pitched. He ended up going 1-for-3 with one run scored and a stolen base as the Twins won, 2-1. Scott Sheldon, Shane Halter and Andrew Romine later became the only other men to accomplish this feat.

In 1969, Tovar saw most of his playing time in the outfield, backing up Bob Allison in left and Ted Uhlaender in center. In the 3rd inning of a May 18th contest against the Detroit Tigers, he and teammate Rod Carew both stole home in the same inning. That fall, he started in center for all three games of the ALCS but hit just .077 as the Twins were swept by the Baltimore Orioles. He became the club's regular centerfielder in 1970 and hit .300 while leading the AL with 36 doubles and 13 triples. Once again, Minnesota did not win a game against Baltimore in the 1970 ALCS, but he hit .385.

Tovar moved to left in 1971 and hit a career-high .311 while pacing the AL with 204 hits. He primarily played right field for the Twins in 1972, and he hit for the cycle in a September 19th game versus the Texas Rangers.

Following the 1972 campaign, Tovar was traded to the Philadelphia Phillies for three players. However, after hitting .268 in 97 games that year, he was sold to the Texas Rangers. After a season and a half with Texas, he was acquired by the Oakland Athletics at the trade deadline in 1975. He was 1-for-2 in the ALCS for the A's that year. He finished his big league career in 1976, splitting the season between the Athletics and the New York Yankees.

Tovar played in the short-lived Inter-American League in 1979. He coached for Venezuela in the 1990 Baseball World Cup.