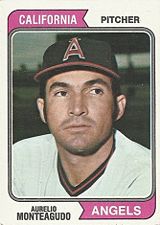 Aurelio Monteagudo was the son of Rene Monteagudo, who also had a major league record of 3-7. He was born in Cuba in 1943, moved to Venezuela after Fidel Castro took over Cuba, and died in Mexico in an automobile accident.

Aurelio, although he appeared in only 72 major league games, spread them over 7 seasons from 1963 to 1973. He was only 19 when he originally broke in with the Kansas City Athletics in 1963. His most unique major league appearance was in 1965, when he was the winning pitcher on the day that Bert Campaneris played all nine positions for the Kansas City Athletics. Campaneris was a fellow Cuban, born one year earlier.

He developed an effective screwball.

Aurelio, sometimes called "Monty" Monteagudo, played 20 seasons in the Venezuela winter league and also many years in the Mexican League. After his playing career, he managed the Danville Suns for part of 1982, the Aciereros de Monclova in 1988, and the Rieleros de Aguascalientes in 1989. He was also pitching coach in the California Angels' chain from 1983-1986, including the Midland Angels in 1985-1986 and for the Knoxville Blue Jays in 1987.

He pitched for Venezuela in the 1970 Caribbean Series and shut out Puerto Rico.