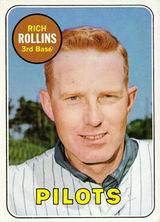 Third baseman Rich Rollins was a solid hitter with some power during a decade-long career spent mostly with the Minnesota Twins.

After attending Kent State University, Rollins was signed by the Washington Senators in 1960 and began his pro career that year, hitting .341 in 62 games with the Wilson Tobs. He spent most of 1961 in the minors with the Charlotte Hornets and the Syracuse Chiefs but got into 20 games for the former Senators, now the Twins. He hit .298 with 16 home runs and 96 RBIs as a rookie for Minnesota in 1962 and made the American League squad for both All-Star Games that summer. In 1964, he led the American League with 10 triples, and the following year, 1965, he made his only career postseason appearances, going hitless in three pinch-hitting appearances versus the Los Angeles Dodgers in the 1965 World Series. On June 6, 1966, he was one of five Twins to homer in the 7th inning against the Kansas City Athletics; these five home runs still stand as the record for most homers in a single inning.

Rollins was selected by the Seattle Pilots in the 1968 expansion draft. He was the team's Opening Day starter at third in 1969 but hit just .225 in 58 games. The Pilots became the Milwaukee Brewers in 1970, and he was released about a month into the season. He was soon picked up by the Cleveland Indians, for whom he played for the remainder of the year before retiring.

Following his playing days, Rollins worked for the Cleveland Cavaliers of the NBA in ticket sales.