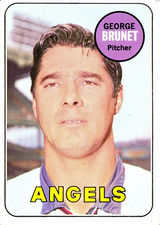 "The Pilots have bought George Brunet from the Angels for something just over the waiver price. He'll fit right in on this ballclub. He's crazy." - Jim Bouton, Ball Four

George Brunet set a record for longevity by pitching professionally each season between 1953 and 1985. He pitched 15 years in the majors with nine clubs and, in the minor leagues, set the all-time strikeout record with 3,175. He also holds the Mexican League record for shutouts, 55, even though he did not debut south of the border until after his major league career.

Brunet was on the other end of the shutouts in 1957. That season, pitching for the Little Rock Travelers of the Southern Association, Brunet's teammates failed to score in a 52 1/3 inning stretch in which he pitched. From June 21st (when Brunet improved to 10-3) till August 3rd, Little Rock never scored with Brunet as their pitcher. He lost 8 straight in that stretch and, at 14-15, finished one loss shy of the league lead. He did, however, top the circuit with 235 strikeouts.

Brunet made his big league debut in 1956 with a fleeting glimpse of the high life as a member of the Kansas City Athletics. He made his first Opening Day roster in 1960 and was rewarded one month into the season with a deal to the Milwaukee Braves. It was not until his arrival in California with the Halos that he settled in one place and hit his stride as a big leaguer, running up a string of four solid seasons between 1965 and 1968 despite uninspiring win-loss records. In the last two years of that stretch, George led the American League in losses, going 11-19 with a 3.31 ERA and a personal best (in the bigs) 165 strikeouts in 1967, then finishing 13-17 in the "year of the pitcher", 1968, with a solid 2.86 ERA in 245 1/3 innings. He returned to his wandering man ways in 1969, seeing his last big league action in a seven-game stint with the St. Louis Cardinals in 1971. In 15 seasons in the bigs, George racked up 921 strikeouts; combined with his minor league total of 3,175, this gave him 4,096 in total.

George died in Poza Rica of a heart attack in 1991. In 1999, he was elected posthumously tor the Salon de la Fama.