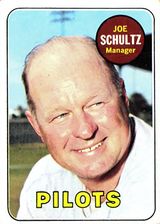 The son of Joe Schultz, catcher Joe Schultz got his first professional at-bat in 1932 (though various sources give the date as 1931, there are 1932 newspaper accounts of the event). As the batboy for the Houston Buffaloes, which his father was managing, Schultz got a pinch-hit single off Hank Thormahlen at the age of just 14. Schultz got his real start for the 1936 Albany Travelers. He made it to the majors for the first time at the tail end of the 1939 season, playing five full seasons and parts of four others as a fringe reserve. His playing career lasted until 1948.

Schultz was the manager of the 1969 Seattle Pilots, immortalized in Jim Bouton's Ball Four. The zany skipper, who was always exhorting his players to "pound that ol' Budweiser," used comedy to keep his team loose. Among numerous funny quotes in the book, one was about the art of bunting: "Boys, bunting is like jacking off. Once you learn how you never forget." Perhaps his most lasting line, however, is "Well, boys, it’s a round ball and a round bat and you got to hit it square."

Schultz was a coach for the 1970 Kansas City Royals, then coached third base from 1971 to 1976 for the Detroit Tigers, replacing Alfred "Billy" Martin as manager to finish the 1973 season.