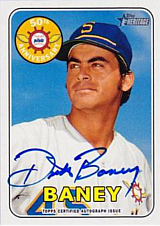 "When Dick Baney went into the game to throw his first major league pitch everybody in the bullpen moved out to the fence to watch him. We wanted to see how he'd do against The Brew, which is what we call Harmon Killebrew. Inside I still think of him as The Fat Kid, which is what Fritz Peterson over at the Yankees always called him... Well, the first time The Fat Kid faced Dick Baney he hit the second pitch 407 feet into the left field seats. After the game I was shaving next to Baney. 'Welcome to the club,' I said. 'You lost your virginity tonight.' 'The only difference,' he said, 'is that all you guys will still be here tomorrow.'" - excerpted from Jim Bouton's Ball Four

Dick Baney posted a lifetime big league record of 4-1 in parts of three seasons split between the Seattle Pilots and Cincinnati Reds. Following his playing days, he posed nude for Playgirl magazine and worked as a general contractor as well as a real estate investor.