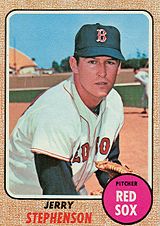 The son of Joe Stephenson, pitcher Jerry Stephenson signed with the Boston Red Sox in 1961 after graduation from Anaheim High School. He made his big league debut two years later, in 1963, as a 19-year-old, giving up 2 runs in 2 1/3 innings in one start against the Washington Senators before returning to the minors for two more years.

Stephenson returned to the Red Sox in 1965 and spent portions of the next four summers in Boston. He had his best season in 1967, going 3-1 with a 3.86 ERA and 1 save in 8 appearances. His team reached the World Series, and he pitched in Game 4, allowing 2 runs in 2 innings as the Sox fell to the St. Louis Cardinals in seven games.

Prior to the 1969 season, Stephenson was released by Boston and signed with the Seattle Pilots. After spending most of that year in the minors, he was traded to the Los Angeles Dodgers for Bruce Brubaker. He made his last big league appearance with the Dodgers in 1970 and hung on in the minor leagues through 1973.

Following his playing days, Stephenson was a Dodgers scout for 25 years and spent the next 14 years scouting for the Red Sox. He died of cancer at age 66.

His son Brian Stephenson pitched for several seasons in the minors and later was also a Dodgers scout.