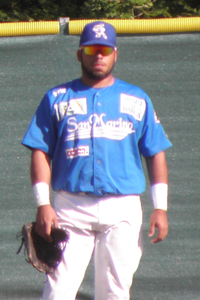 Willie Vasquez played in the minors, Italy and Venezuela as well as for the Venezuelan national team. He led the 2011 Baseball World Cup in home runs and was named the 2011 Italian Baseball League MVP.

In 2008, Willie hit .380/.480/.540 for T&A San Marino with 30 runs and 30 RBI. He was second in average to Giuseppe Mazzanti and tied Rayner Bautista for the most hits (62). He was third in OBP behind Mazzanti and Claudio Liverziani and tied for 4th with 32 walks. He helped lead San Marino to its first Serie A1 title. He was named the league's All-Star left fielder.

During the 2008 European Cup in Grosseto, Willie hit .474/.522/.842 with 5 runs and 3 triples in 5 games. He led the Cup in triples, was second to Richard Montiel in average, tied Daniel Sanchez and Bryon Bell for third in hits (9) and was third with 16 total bases. He broke up a no-hitter by Pat Ahearne in the 7thi inning one game.

In the 2008 Americas Baseball Cup, Vasquez was the top contact hitter for the host Venezuelans, hitting .414/.469/.483 and making the tourney All-Star outfield alongside Ardley Jansen and Danilo Sotelo. Vasquez played a key role in helping Venezuela win a spot in the 2009 Baseball World Cup. He went 3 for 5 in a key win over the Puerto Rican national team, which otherwise was unbeaten in the tourney. Vasquez was 7 for 12 with two doubles, a homer, 3 runs and 6 RBI in the Matino phase of the 2009 European Cup but San Marino failed to advance to the Final Four. He tied teammate Max De Biase for the lead in both average and RBI and led in total bases.

He returned to Italy in 2011. He hit .344/.447/.563 for San Marino with 37 runs, 26 RBI, 8 homers and 30 walks in 42 games. He finished 6th in average (between Lorenzo Avagnina and Josh Phelps), 5th in slugging (between Rodney Medina and Avagnina), 3rd in OBP (behind Brandon Chaves and Davide Dallospedale), tied for second in runs (with Juan Carlos Infante), second in hits (58, 2 behind Medina), tied for 5th in doubles (even with Carvajal), tied Carlos Duran for the home run lead, led in total bases (90, 2 ahead of Medina) and tied Giuseppe Mazzanti for third in walks. He was named the All-Star first baseman and league MVP. He put up a .353/.405/.412 line in the 2011 Italian Series as San Marino battered Nettuno for the title.

In the 2011 European Cup, he hit .259/.364/.407 as San Marino won it all. In the semifinal, he hit a 10th-inning sacrifice fly off Al Morales Gomes to score Mattia Reginato with the game's only run to beat the Amsterdam Pirates. He was a dominant force in the 2011 Baseball World Cup, hitting .341/.396/.682 with 5 homers and 11 RBI in 12 games. He had 3 hits against South Korea, went deep off Nicaragua's Julio Raudez, drilled a 2-run homer off Germany's Philipp Hoffschild, cracked a solo shot against Italy's Alessandro Maestri and launched two solo homers in a loss to Todd Redmond and Team USA. He was two RBI of the event co-leaders (Curt Smith and Fernando Seguignol), was 9th in slugging entering the final day's games (between Smith and Jordy Mercer) and led in home runs (two more than runner-ups Matt Clark, Tommy Mendonca, Donald Lutz, Seguignol, Smith and José Dariel Abreu). He did not win All-Star honors at 1B as those went to Abreu, with Smith another strong contender. Back as Venezuela's first baseman in the 2011 Pan American Games, he was not as good at .235/.222/.353.