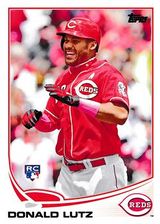 Donald Lutz made his major league debut in 2013, becoming the first big leaguer raised in Germany, even though he was born in the United States. [1] He only spent two seasons in the majors before injury ended his major league career; he is attempting a comeback in Australia in 2015. He is the brother of Sascha Lutz, a teammate on the German national team on several occasions from 2008-2016. [2] He was the second major leaguer to come out of the MLB European Academy. Lutz has hit for three cycles in the minors and has also played in leagues in Germany, Australia and Mexico.

He is a dual citizen of the USA and Germany; his father is American and his mother is German. Born in the United States, he moved to Germany at age 1 due to his parents' divorce. He played ice hockey and handball in his youth and only began playing baseball at age 15. [3]

In 2006 and 2007, he attended the Major League Baseball European Academy. [4] Lutz was 0 for 12 with two walks in Bundesliga's first division in 2007, playing for the Regensburg Legionäre. In the second division, he led with a .506 average, drove in 39 runs and hit six home runs in 24 games. He went 1 for 14 with five whiffs in the 2007 European Junior Championship. [5] He was signed by the Cincinnati Reds in the fall of 2007. The scout was Jim Stoeckel. [6] Lutz was added to the German national team for the 2008 Final Olympic Qualification Tournament. He hit .250/.318/.400 as one of their three top hitters (along with his brother); he tied for the team lead in both runs (2) and RBI (2) while playing primarily right field. He singled in Dominik Wulf with the winning run against South Africa. He hit a solo homer off of Min-han Son for Germany's only run against South Korea. [7]

Lutz made his US debut on June 20th, singling in his only at-bat against the GCL Red Sox. He started his stateside career 5 for 9. He hit .250/.317/.361 for the season, posting an OPS about league average. He played primarily 1B and DH though he saw a little time in left field.

Lutz continuing to make strides in 2011, hitting .301/.358/.492 with 20 home runs and 85 runs for the Dayton Dragons. He became the first Dragon to hit for the cycle, doing so on July 21st. He was among the Midwest League leaders in average (7th, between Zach Walters and Rubi Silva), slugging (9th, between Jake Marisnick and Walters), home runs (tied for 4th), runs (tied for 3rd) and total bases (tied for 4th with Marisnick). Among Reds farmhands, he tied for second in runs (behind Billy Hamilton), tied for second in home runs (11 behind Neftali Soto), was 6th in RBI and tied for third in total bases. Jesus Aguilar was named the league All-Star 1B. [12]

In the 2011 Baseball World Cup, Lutz and fellow US minor leaguer Max Kepler led the attack, Lutz hitting .348/.407/.739. His 8 RBI in 7 games easily led the team (no one else had more than 3), he had three of their four homers (Kepler had the other one) and he tied Kepler for the top average. His long balls came off Nicaragua's Berman Espinosa, Cuba's Miguel Alfredo González and Australia's Hayden Beard. He was 5th in the event in slugging heading into the finals, between Frederich Cepeda and Bryan Engelhardt. He tied Tommy Mendonca, Matt Clark, Fernando Seguignol, Curt Smith and Jose Dariel Abreu for second in home runs, two behind leader Willie Vasquez. [13]

In the 2013 World Baseball Classic Qualifiers (played in September 2012), he started at first base for Germany and went 4 for 13 with a double (off James Avery), walk, four runs and two RBI, though he also made a couple of errors. He tied for third on the team in runs, one shy of American imports Aaron Altherr and Eric Suttle. Germany finished second in their pool behind Team Canada. [17] As Germany hosted their pool, he got to play in front of a home crowd and described the experience as great. [18] He began the summer of 2013 back with Pensacola and was at .211/.294/.513 with 5 home runs after 21 games. He was then called up to the majors when Chris Heisey went on the disabled list. [19] He made his major league debut on April 29th, pinch-hitting for Mat Latos in the 7th inning of a game against the St. Louis Cardinals; he grounded out to second baseman Matt Carpenter to end the inning. He was the second graduate of the MLB European Academy to make the majors, following Italian Alex Liddi. [20] His first hit in the majors came off Shawn Camp on May 5th. He hit his first big league homer on May 12th, connecting with two men on board against Wily Peralta of the Milwaukee Brewers in a 5-1 Reds win. He hit .241/.254/.310 in 59 plate appearances over 39 games for the 2013 Reds, making 27 putouts as a corner outfielder, and also hit .245/.318/.424 in 65 games for Pensacola.

Back with the Yaquis in the winter of 2014-2015, he batted .280/.363/.473 with a team-high 16 doubles in 55 games while serving as their main right fielder. He was 6th in the Mexican Pacific League in two-baggers and 5th in slugging (between Olmo Rosario and Carlos Valencia). [23] He started 2015 back with Louisville, going 8 for 42 with 5 walks and 3 doubles, but injured his shoulder while making a throw from the outfield. He had Tommy John surgery then was released by the Reds to make roster space available when Iván DeJesús Jr. was called up. [24]

Ready to return to game action in late 2015, he returned to Australia, this time with the Brisbane Bandits. [25] He hit .272/.348/.524 with 26 RBI in 27 games. Had he qualified, he would have been 6th in the 2015-2016 Australian Baseball League in slugging; he missed the top 10 in doubles by one despite only playing in about half the games. His play earned him a minor league deal back with the Reds for 2016. [26] He was the hero of the 2016 Australian Baseball League finals, hitting a three-run homer off regular season win leader Steven Chambers in the clinching game on his 27th birthday and being named the finals MVP as Brisbane defeated the Adelaide Bite in two games. [27]

Hitting third for Germany and playing 1B in the 2017 World Baseball Classic Qualifiers in March 2016, he went 0 for 3 with two walks and two runs in the opening 5-4 loss to Nicaragua. He scored their first run after drawing a Samuel Estrada walk in the 6th and coming home on a homer by Bruce Maxwell. In the top of the 10th, he drew a walk from Jhonny Polanco and scored on a double by Ludwig Glaser, but the team allied two in the bottom of the inning to lose an upset bid. In the following 15-3 loss to the Czech national team, he provided a rare bright spot for the disappointing Germans, going 1 for 2 with a walk, two runs and a RBI as he played a role in all their roles. His sacrifice fly off John Straka scored Kent Matthes in the first to open the scoring for the game. He drew a walk from Martin Schneider in the 6th and came home on a double play ball from Maxwell. That made it 5-2, as the game was not yet out of reach. In the 8th, though, Germany trailed 15-2, when he singled off Petr Minařík and came home on a double by Maxwell. For the event, he led Germany in runs (scoring 4 of their 7) and tied Glaser for third in OBP. He tied Matěj Hejma, Adrian Gonzalez and Jakub Malik for the most runs in the Mexico qualifier even though he played only two games to the three for those Mexians and Czechs and four for Nicaragua. [28]