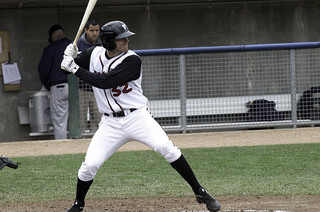 Outfielder Jake Marisnick made his major league debut in 2013 after having been considered a top prospect for some time before that.

He was selected by the Toronto Blue Jays in the third round of the 2009 amateur draft; the scout was Rick Ingalls. The 104th overall selection, the pick was compensation for the loss of A.J. Burnett to free agency. He made his pro debut the following summer with the GCL Blue Jays and hit .287/.373/.459 in 35 games then was promoted to the Lansing Lugnuts, for whom he batted only .220/.298/.339 in 34 contests. Overall, he had 23 steals in 26 tries and registered 8 outfield assists. Baseball America named him the top athlete in the Jays system and as the #4 prospect in the Gulf Coast League (behind Gary Sanchez, Miguel Sano and Justin O'Conner.

He spent most of 2011 with the Lansing Lugnuts, hitting .320/.392/.496 with 14 home runs, 77 RBIs, and 37 stolen bases (in 45 tries), and was a Midwest League All-Star (joining Rymer Liriano and Michael Crouse in the outfield). He was second in the MWL in average (.006 behind Josh Whitaker), 4th in OBP, 8th in slugging (between David Vidal and Donald Lutz), 4th in OPS, 3rd in hits (148, behind Nick Castellanos and Billy Hamilton), 7th in RBI (between Derek Dietrich and Castellanos), tied for 4th in total bases (229, even with Lutz) and 6th in steals. He was rated the third-best MWL prospect by Baseball America, behind Taijuan Walker and Hamilton, and as the best athlete in the Jays chain by the same publication.

Marisnick's performance fell off in 2012, though. He split time between the Dunedin Blue Jays (.263/.349/.451 in 65 G)) and New Hampshire Fisher Cats (.233/.286/.336 in 55 G), with only 8 home runs, 50 RBI and 24 steals in 33 tries. He did leg out 10 triples, tying Anthony Gose for the lead in the Toronto chain. He hit .314 for Salt River in the Arizona Fall League following the season. Baseball America still rated him very highly - as the best defensive outfield and having the best outfield arm in the Toronto minors, as the #2 Toronto prospect (after Aaron Sanchez), as the #64 prospect in the minors, as the 11th-best Florida State League prospect (between Jesse Biddle and Adam Morgan) and as the #9 Eastern League prospect (between Aaron Hicks and Tommy Joseph).

He was dealt to the Miami Marlins as part of a 12-player trade, sent along with Yunel Escobar, Adeiny Hechavarria, Henderson Alvarez, Jeff Mathis, Justin Nicolino and Anthony Descalafani for Mark Buehrle, John Buck, Jose Reyes, Josh Johnson and Emilio Bonifacio. After being injured at the start of 2013, he played three games with the Class A Jupiter Hammerheads before joining the Jacksonville Suns of the AA Southern League. He hit .295/.357/.504 in 66 games, with 13 doubles, 12 homers and 46 RBI to earn a call-up to Miami on July 22nd. he made his big league debut the next day, starting in center field and batting 6th for the Marlins against the Colorado Rockies. However, it was teammate Christian Yelich, who was also making his debut in left field, who stole the show that night. Yelich went 3 for 4 while Marisnick was shut out in 4 at-bats in the Marlins' 4-2 win. In his first at-bat, he was retired by Jhoulys Chacin on a grounder. He had to wait until his fourth game to collect his first hit, a single off Jeff Locke of the Pittsburgh Pirates on July 26th; he had started his career 0 for 14. He ended up hitting .183 in 40 games, with 1 homer and 5 RBI.

He returned to the minors at the start of the 2014 season, hitting .277 in 89 games with the New Orleans Zephyrs in his first taste of AAA ball. He hit 16 doubles and 10 homers, during his stint there, scored 50 runs and drove in 40. He was called up briefly to Miami in June, but only went 8 for 48 (.167) with no extra-base hits. On July 31st, he was involved in the second big trade of his young career, being sent to the Houston Astros along with Colin Moran and Francis Martes in return for two major leaguers - P Jarred Cosart and IF/OF Enrique Hernandez - and minor leaguer Austin Wates. he played 51 games for Houston the rest of the way, hitting .272 with 3 homers and 19 RBIs. In 2015, he was the team's most used centerfielder, playing 133 games while hitting .236 with 9 doubles and 36 RBIs. On May 7th, he completed an unassisted double play in the 4th inning of a 3-2 win over the Los Angeles Angels of Anaheim, snagging a line drive off the bat of Matt Joyce and then tagging Albert Pujols who had ventured too far off first base. Because of his relatively weak bat, he lost his starting job to late-season acquisition Carlos Gomez and did not start the Wild Card Game against the New York Yankees on October 6th. He came on as a defensive replacement in centerfield for Gomez in the bottom of the 9th. With Gomez having health issues, Jake got to make two starts in center against the Kansas City Royals in the Division Series and went 3 for 7 overall.

In 2016, he played 116 games for the Astros, hitting .209 with 5 homers and 21 RBIs. The Astros were concerned with his lack of production with the bat, and while they loved his defensive play in center, he was confined to a back-up role in 2017. On July 31st, however, he had a career game against the Tampa Bay Rays, hitting 2 homers and driving 5 runs to lead Houston to a 14-7 win. He did his damage hitting out of the 9th spot, which is where he usually batted on the occasions when he was starting games in centerfield. On September 13th, he broke his right thumb while sliding into second base headfirst against the Angels. The injury meant that he would be out for six to eight weeks, meaning he would not be back during the regular season, although there was a possibility of seeing him return if the Astros went deep in the postseason. He was hitting .243 in 106 games, with a career-high 16 homers and 35 RBIs. His 50 runs scored and 20 walks were also personal bests, and his OPS+ of 121 was well above anything he had put up previously. This made him an important - if uncelebrated - cog on the team. Luckily for them, the Astros had acquired another centerfielder, Cameron Maybin, just before the cut-off date for players to be eligible for the postseason. He ended up missing the entire postseason, as the Astros won the first Championship in team history.

In 2018, he began the season mired in a deep slump. On May 16th, he was hitting just .141 in 34 games when he was sent down to the AAA Fresno Grizzlies. He returned after a week, but it took him a while to lift his average above the Mendoza Line, only doing so on August 1st, after missing the second half of July. he finished the season at .211 in 103 games, with 10 homers and 28 RBIs. He was used as a defensive substitute in the postseason, getting only 3 at-bats in two series as the Astros were were eliminated by the Boston Red Sox at the ALCS stage.

On the last day before the All-Star break, on July 7, 2019 he was involved in a violent collision at home plate with C Jonathan Lucroy of the Los Angeles Angels as he was attempting to score on a shallow sacrifice fly in the 8th inning with the score 10-10. He barreled into the catcher, sending him crashing backwards to the ground with a broken nose and a concussion. Lucroy had to be carted off the field. The umpire disallowed the run as he judged that Marisnick had made no attempt to avoid a collision. Yadier Molina for one weighed in after the incident, saying that Marisnick should be suspended, something with which Angels manager Brad Ausmus, himself a former catcher, agreed. On July 11th, he received a two-game suspension for his part in the collision. He was coming off a solid first half, in which he had hit .250 with 8 homers and 24 RBIs, good for an OPS+ of 103. On July 16th, he was hit by a pitch from the Angels' Noe Ramirez, a gesture which manager A.J. Hinch denounced as having been deliberate retaliation for the collision and which, in his view, should have resulted in Ramirez being ejected from the game. The next day, Ramirez was handed a three-game suspension for his gesture. Marisnick finished the season at .233 in 120 games, with 10 homers and 34 RBIs, his value being primarily defensive. In the postseason, he went 4 for 11 as the Astros made it to Game 7 of the World Series before bowing to the Washington Nationals.

On December 5, 2019, he was traded to the New York Mets in return for two prospects, Kenedy Corona and Blake Taylor. The Mets wanted to make him their starting centerfielder in 2020, in place of Juan Lagares who had left via free agency. However, he played just 16 games for the Mets during the pandemic-shortened season, hitting.333 with 2 homers and 5 RBIs. He spent a month on the injured list, from late July to late August, with a hamstring pull, and another week in September with tightness in the other hamstring. After the season, he became a free agent. He signed with the Chicago Cubs on February 20, 2021 and hit .227 in 65 games with 5 homers and 22 RBIs. On July 30th, he was traded to the San Diego Padres in return for P Anderson Espinoza as part of the Cubs' fire sale of veteran players.