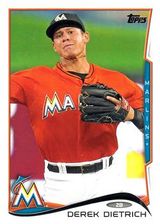 Derek Dietrich came to the majors in 2013. He is the grandson of Steve Demeter.

Dietrich made the Aflac All-American Game in 2006. He was All-State three straight years in high school and was named Ohio Player of the Year by Gatorade. He hit .421/.581/.855 that year and set school records in hits (136), runs (108), homers (18), doubles (42), walks (75), RBI (125) and saves (13, tied). The Houston Astros took him in the third round of the 2007 amateur draft, one spot before Daniel Descalso. It was Houston's first selection that year, but they still were not able to come to terms with him (they would get a compensation pick the next year and take Jonathan Pettibone).

Going on to college, Derek started at short for Georgia Tech and hit .332/.410/.592 with a team-high 66 RBI. He was named both second-team All-Atlantic Coast Conference and second-team Freshman All-American (by Baseball America). In 2009, he fell to .311/.426/.511 and was again second-team All-ACC. As a senior, he took his game up another notch, batting .350/.457/.650 with 17 homers, 61 RBI and 68 runs in 62 games. He was 7th in the ACC in slugging, 7th in OPS, tied for 9th in runs and tied for 6th in home runs. He made first-team All-ACC at short and was picked as a third-team All-American by Baseball America (Nomar Garciaparra and Tyler Green were the only prior Georgia Tech shortstops to win All-American acclaim). The Tampa Bay Rays took Dietrich in the second round (79th overall) of the 2010 amateur draft. The scout was Milt Hill.

Dietrich debuted as the starter at second base for the Marlins, hitting 7th, on May 8, 2013. He singled off Jason Marquis in his first at-bat and went 1 for 3 in a 1-0 loss to the San Diego Padres. Two days later, he hit a three-run homer off Matt Magill, the big blow in a 5-4 win over the Los Angeles Dodgers. He got to play regularly at second over the next two and half months, as projected starter Donovan Solano was unavailable because of an injury. He showed good prowess in fielding, but hit only .214/.275/.405 in 57 games. The Marlins were pleased with his power, that included 10 doubles, 2 triples and 9 homers, but felt he needed more seasoning in the minors with Solano now healthy, and he was thus sent back to the minors on July 22nd. Shortly after being sent down, he made some public allegations about inappropriate actions by Marlins hitting coach Tino Martinez, accusing him of having been verbally and physically abusive towards him. He was the first but not the only player to make such a complaint, and Martinez resigned on July 28th, recognizing that his behavior had been improper.

In 2016, Dietrich started at second base during the first half of the season while Dee Gordon was serving a suspension for PED use. He did quite well during that time, but still had to give way to Gordon when he returned. He still ended up playing a career-high 128 games, hitting .279 with 7 homers and 42 RBIs. He had an excellent OBP of .375, in part as a result of leading the National League with 24 hit-by-pitch. That number was also a team record, and in spite of having only 4 seasons under his belt, and only one with over 100 games played, he was the all-time franchise leader in the category with 54. In 2017, he hit .249 in 135 games with 13 homers and 53 RBIs. He was the Marlins' regular third baseman, then in 2018 was the main left fielder for the team, which had a rough season. Derek for his part hit .265 in 149 games, but his OBP fell to .330 as he drew just 29 walks against 140 strikeouts. He had almost as many hits-by-pitch as walks, with 21, giving him 93 in 6 seasons. He did set personal bests for runs (72), doubles (26) and homers (16).

Following the 2018 season, he became a free agent and on February 19, 2019 signed a free agent contract with the Cincinnati Reds. He was slated to be a back-up utility player, but plans changed when 2B Scooter Gennett injured his groin a month later, opening up some playing time in his absence. On Opening day, March 28th, he hit a three-run pinch-homer off Richard Rodriguez of the Pittsburgh Pirates in the 7th inning that was the difference in a 5-3 win. On April 7th, he hit two more homers against the Pirates, and was at the center of a fracas. He had stopped to admire his very long drive off Chris Archer in the 2nd inning, which landed in the Allegheny River behind the right field wall, and when he came up to bat again to lead off the 4th, Archer threw a pitch behind him that seemed very much intentional. Yasiel Puig came off the bench to defend him and basically took on the whole Bucs team by himself; a number of players and coaches were ejected following the brawl, including Puig - but neither Archer or Derek, although Archer would later be handed a five-game suspension. Dietrich struck out on that at-bat, but added another long ball off Nick Kingham in the 8th as the Reds lost, 7-5. On April 13th, he was the hero of the Reds' 5-2 win over the St. Louis Cardinals in the first of two games played at Estadio Monterrey in Mexico. He broke a 1-1 tie with a solo homer off Adam Wainwright in the 7th, then in the 8th added a two-run triple off Mike Mayers. On May 28th, he had the first three-homer game of his career, and all three long balls were good for two runs, as he led the Reds to an 11-6 win over the Pirates. He now had a career high 17 homers, and 12 of his last 17 hits had gone over the fence! Eight of his homers had been hit against the Bucs. On June 20-22, he set a record by being hit by a pitch six times during a series against the Milwaukee Brewers, including three times in the middle game. Brewers manager Craig Counsell argued to no avail that he was leaning into pitches and was not making effort to avoid being hit by them.

He is married to professional tennis player Monica Puig.