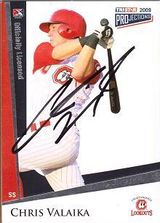 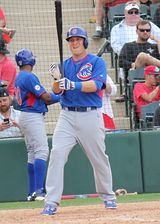 Chris Valaika made his major league debut with the Cincinnati Reds in 2010.

Valaika set his high school's record with 18 career home runs and topped .400 his sophomore, junior and senior years. In the 2001 World Youth Championship, Valaika hit .444/?/.555 for the USA and was named the All-Tournament second baseman in helping them to a title. In 2003, he played for the USA junior national team in the Pan-Am Cup and hit .385 while slugging .692. He was 4th on the team in average.

Valaika remained productive as a freshman in college, hitting .347/.411/.536. He was named the Big West Conference Freshman Player of the Year and the Freshman All-American SS according to Baseball America. He was attending UC Santa Barbara, the same school his favorite player, Michael Young, had gone to.

Chris was again on a US national team, now the college one after having been on the youth and junior ones. He went 3 for 15 with no extra-base hits in the 2004 World University Championship, splitting second base duties with Jed Lowrie as the USA won the Gold Medal. Overall, he hit .239 and slugged .413 for the team that summer. One of just four freshman on the unit, he backed up Lowrie at 2B and Troy Tulowitzki at SS.

The Cincinnati Reds chose Valaika in the third round of the 2006 amateur draft (84th overall) and he signed with scout Rex de la Nuez for a $437,500 bonus.

Valaika was assigned initially to the Billings Mustangs, a low start for a college player. He did very well, hitting .324/.387/.520 with 58 runs and 60 RBI in 70 games. He was 8th in the Pioneer League in average, second in RBI (one behind leader Chris Errecart, second in runs (6 behind Ryan Rogowski), tied Gerardo Parra for the hit lead (89), tied Chris Carter for the league lead in total bases (143), was third in extra-base hits (34) and tied for third in doubles (22). He led league shortstops in putouts (99) and double plays (51). He also set the league record for the longest hitting streak with 32 games, the longest in the affiliated minor leagues in 2006. He made the All-Star team at shortstop and helped power Billings to the best regular-season record in the loop. He won league MVP honors and was named the Topps Pioneer League Player of the Year. Baseball America rated him as the #13 prospect in the league.

In 2008, he started the year with the Sarasota Reds, where he hit .363/.393/.585 with seven home runs and 31 RBI in 32 games. He was then promoted to Chattanooga of the Southern League, where he put up a line of .301/.352/.443 in 97 games. He led Reds farmhands in average and hits. Baseball America named him as the Reds Minor League Player of the Year. He had one at-bat for the USA in the 2008 Futures Game, striking out after replacing Jason Donald at shortstop.

He is the brother of Matt Valaika and Pat Valaika.