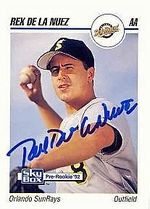 Rex de la Nuez made it to AAA as a player then became a scout.

De la Nuez was picked by the Minnesota Twins in the 22nd round of the 1989 amateur draft, one round before they took Derrick White. He had a good debut that summer for the Elizabethton Twins, hitting .321/.432/.539 with 9 homers and 47 runs in 55 games. He was 7th in the Appalachian League in average (between Rob Stiegele and Brent McCoy), was third in OBP, ranked 4th in slugging, placed 8th in runs, was 8th in walks (37) and tied for 6th in home runs. He helped Elizabethton to a title and was named to the league's All-Star outfield alongside Melvin Nieves and teammate Mike House.

De la Nuez hit .268/.376/.437 with 34 doubles and 69 walks for the 1992 Orlando Sun Rays. He was 4th in the Southern League in walks (between Aubrey Waggoner and Ben Shelton) and tied Nigel Wilson for the SL double lead. Repeating in the SL with the '93 Nashville Xpress, the Cal State LA alumnus batted .236/.407/.378 with 71 runs, 93 walks and 23 steals while only being caught four times. He finished third in OBP (behind Carlos Delgado and Ed Giovanola), 9th in steals and 3rd in walks (behind Delgado and Rich Becker). He was one walk behind Becker for the lead in the Twins system.