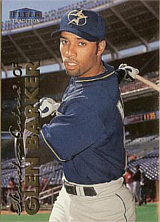 Glen Barker played three seasons for the Houston Astros, appearing in two postseason games. In 235 big league games, he crafted a .232/.330/.323 line with 8 extra base hits in 197 plate appearances. He was originally selected in the 1993 amateur draft by the Detroit Tigers and is one of only seven non-pitchers in the history of Major League Baseball (through 2006) to have played at least 100 games and have more games played than plate appearances. Barker later was Pacific Rim Scouting Director for the Astros. In 2011 and 2012, he was the minor league baserunning coordinator for the San Diego Padres.