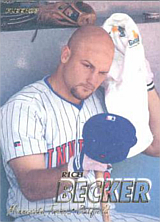 Rich Becker was drafted by the Minnesota Twins in the third round of the 1990 amateur draft. He spent his first minor league season with the Elizabethton Twins, playing 56 games and rapping 56 base hits, including 6 home runs, for a .289 batting average. He would see the inside of the Kenosha Twins, Visalia Oaks and the Nashville Xpress clubhouses before reaching the comfortable confines of the Minnesota Twins' living quarters in 1993. He made his major league debut late that year, appearing in 3 games with 7 at bats, getting 2 hits. He was sent to the Pacific Coast League Salt Lake Buzz to begin 1994, then was back with the Twins. In 28 games and 98 at bats, he hit .265. It was back to Salt Lake for 36 games in 1995, where he hit .316 and headed back to the major leagues.

1995 was Rich's first year as a regular; he showed promise, although he hit only .237 in 106 games, and in 1996, manager Tom Kelly put Becker in the unenviable position of succeeding Kirby Puckett as the Twins' starting center fielder. He responded with his best year as a major leaguer, batting .291 with 12 home runs, 79 RBI, and 19 stolen bases. On July 13, he had his best day as a big leaguer, getting four hits, including two home runs, a double, and 6 RBI. He led the American League in putouts in center field, as he was always an excellent defender. His numbers declined in 1997, and the Twins traded Becker to the New York Mets for Alex Ochoa in December. After the trade, Rich bounced around several teams, finding marginal playing time with the Mets and Baltimore Orioles in 1998, Milwaukee Brewers in 1999, and the Oakland Athletics and Detroit Tigers in 2000. Becker spent playing time with the minor league Toledo Mud Hens, Calgary Cannons and the Fargo-Moorhead Redhawks in 2001 and 2002 and decided it was time to think things over. At the end of the 2002 season, Becker retired at 31.

Rich finished his major league career appearing in 789 games with 2,227 at bats, 570 hits (including 45 home runs) with a .256 batting average. His minor league numbers showed 770 games, 2,851 at bats, 821 hits, including 75 home runs and a .287 batting average. Becker spent 13 seasons in professional baseball. Despite not having a truly remarkable career, Rich was the only player to come out of the 3rd round of the 1990 draft and sustain any sort of longterm career.