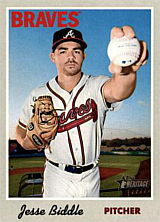 Jesse Biddle was the first high school pitcher from the Northeast taken in the 2010 amateur draft, by his hometown Philadelphia Phillies with the 27th pick. The left-handed Biddle had a fastball (timed up to 92 mph) and changeup as his top pitches. He made his pro debut June 25, 2010, with three hitless, scoreless innings against the GCL Yankees. He moved to the Williamsport Crosscutters before the end of the year, finishing his first professional season with a record of 4-1, 3.92 in 12 starts. One of his wins was a complete game shutout. Baseball America rated him the #7 prospect in the Gulf Coast League, between Juan Urbina and Aaron Altherr. In 2011, Biddle pitched for the Lakewood Blue Claws in the South Atlantic League, where he made 24 starts in 25 appearances, pitching 133 innings with a record of 7-8, 2.98; he gave up 104 hits and struck out 124 against 66 walks in a solid season. He was 4th in the South Atlantic League in ERA, between Taylor Rogers and Roman Mendez. Baseball America ranked him the league's 6th-best prospect, trailing only Jameson Taillon among pitchers. In 2012, he was promoted to the Clearwater Threshers in the Florida State League, where his record was 10-6, 3.22 in 26 starts. He pitched 142 2/3 innings, gave up 129 hits, struck out 154 and walked 54 to confirm his place as a top pitching prospect.

After a solid start, Jesse hit his first bump in the road in 2013 when he was limited to a 5-14 record in 27 starts for the Reading Fighting Phils of the Eastern League. His ERA was still a solid 3.64, and he struck out 154 batters in 138 1/3 innings, so his season was not bad apart from the tough win-loss record. He followed with another very poor mark for Reading in 2014, 3-10, with a 5.05 ERA to boot. He was injured part of the year, making only 16 starts in AA and making rehab appearances with a couple of lower-level teams in the system. In 2015, he was back with Reading for a third straight season, and while he found himself winning a number of games, going 7-2 in 15 starts, his ERA was middling at 4.24. Still, he was given a chance to pitch at AAA for the first time, going 2-4 in 9 starts for the Lehigh Valley IronPigs of the International League. His ERA was 6.25, so his combined line was 9-6, 4.95, and his strikeout rate fell markedly, to 89 over 125 1/3 innings. Biddle underwent reconstructive elbow surgery after the season.

At that point, the Phils gave up on Jesse and, on February 3, 2016, traded him to the Pittsburgh Pirates for Yoervis Medina. The Bucs were convinced he could still emerge as a successful big league pitcher after his recovery from the surgery. A few weeks into spring training, on March 11th, he was designated for assignment when the Pirates signed former postseason hero David Freese. Biddle was claimed by the Atlanta Braves a week later. He made his major league debut with the Bravos in April 2018 and pitched 60 times, all in relief, going 6-1, 3.11 with a save. He allowed just 50 hits in 63 2/3 innings and struck out 67 batters. He was not used in the postseason, however, and started the 2019 season slowly, with an ERA of 5.40 in his first 15 games and 10 walks in just 11 2/3 innings. On May 15th, he was designated for assignment and, on May 20th, was sent to the Seattle Mariners, along with the injured Arodys Vizcaino, in return for Anthony Swarzak. One month later, he was DFAed and claimed by the Texas Rangers, and suffered a season ending elbow injury in July. Texas outrighted him off the 40 man roster after the season.