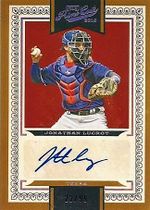 Jonathan Lucroy debuted in the majors at age 23.

Lucroy had an impressive high school career. As a freshman, he was honorable mention for the state of Florida. He made All-State as a junior, then hit .450 with 10 homers as a senior, finishing with the school record of 20 home runs. He jumped right in during his freshman year of college too, hitting a team-high .379 with a .427 OBP and .544 slugging percentage, driving in 48 in 54 games and making no errors afield. He made second-team All-Sun Belt Conference (finishing 5th in the conference in average) and was named a Freshman All-American by Louisville Slugger. Baseball America chose J.P. Arencibia instead in that role.

The Milwaukee Brewers picked Lucroy in the 3rd round of the 2007 amateur draft; he was their second overall pick after Matt LaPorta as they had only one first-round pick and no second-rounders that year. He was signed by scout Brian Sankey and made his pro debut that summer. Just as he did very well as a freshman at both high school and college, Lucroy quickly adapted to the pros, hitting .342/.383/.487 for the Helena Brewers. He was 6th in the Pioneer League in average and tied for the most double plays by a catcher, four. Lucroy was named the All-Star catcher in the league. Baseball America rated him the #6 prospect in the loop, right behind Aaron Poreda and Brandon Waring. Sent to the North Shore Honu that winter, he hit .299 to place 9th in the Hawaiian Winter League in average. Baseball America rated him the league's #19 prospect, right behind Lucas Duda.

With the 2009 Huntsville Stars, Lucroy had a batting line of .267/.380/.418. He had 78 walks to 66 strikeouts and led Brewers farmhands in walks. He also smacked 32 doubles. He led Southern League backstops in putouts (727) and assists (70). Baseball America rated him as the #13 prospect in the SL, between Todd Frazier and Chris Heisey. That fall, he hit .310 for the Peoria Javelinas in the Arizona Fall League. Baseball America listed him as Milwaukee's #5 prospect going into 2010.

Lucroy quickly rose up the chain in 2010 - after .452/.500/.524 in 10 games for Huntsville and .238/.265/.363 in 21 for the Nashville Sounds, he got called up to The Show when Gregg Zaun got hurt. In his major league debut on May 21st, he entered with a 15-0 deficit in the 8th inning, pinch-hitting for George Kottaras. Lucroy singled off Nick Blackburn for his first big league hit. He quickly established himself as the Brewers' starting catcher, ahead of the minor league veteran Kottaras, and played 75 games in the majors that year, all of them as the starting backstop except for his debut. He hit .253 with 4 homers and 26 RBI in 277 at-bats. In 2011, he played the full season as the starter behind the plate, getting into 136 games, with a batting line of .265/.313/.391, with 16 doubles, 12 homers and 59 RBI. He was also praised for his handling of the pitching staff, which saw all five members of the starting rotation reach double digits in victories, and closer John Axford lead the National League in saves. The Brewers won the NL Central title for the first time in team history. He went 3 for 15 in the NLDS as the Brewers eliminated the Arizona Diamondbacks in 5 games, and then 5 for 17 with a double and a homer as they fell to the St. Louis Cardinals in 6 games in the NLCS.

Jonathan suffered a freak injury termed a "boxer's fracture" on his right hand on May 28, 2012. Staying at the team hotel with his wife in Los Angeles, CA, he reached under the bed to pick up a stray sock when, as he tells it, his wife shifted a suitcase which fell on his hand, breaking a bone. He was immediately placed on the disabled list with a prognosis of 4 to 6 weeks. He had signed a five-year contract extension during spring training and at the time of the injury was hitting a sparkling .345 in 43 games, with a .583 slugging percentage thanks to 10 doubles, 4 triples and 5 homers. It was the latest in a string of injuries that had cost the Brewers a number of key performers for the remainder of the year, including SS Alex Gonzalez, P Chris Narveson and 1B Mat Gamel. He returned to action on July 26th, but by then the Brewers had fallen well out of contention. He had a career day on August 30th against the Chicago Cubs, hitting a grand slam against Brooks Raley and added three more RBI in the game, but the Brewers were still defeated, 12-11. It was actually his second seven-RBI game of the year, as he had done so previously on May 20th, in a 16-4 win over the Minnesota Twins, when he had hit his first career grand slam off Jeff Gray. Overall, he hit .320/.368/.513 for a 132 OPS+ in 96 games that season, with 12 homers and 58 RBIs.

He was a backup catcher for Team USA in the 2013 World Baseball Classic. He grounded out against Sergio Romo after replacing J.P. Arencibia against Mexico. In his lone start against Italy, he flew out against Luca Panerati, singled off Marco Grifantini, flew out against Tim Crabbe and drew a walk from John Mariotti. Backing up Joe Mauer against Team Canada, he entered in the bottom of the 8th and singled off Scott Mathieson to score Brandon Phillips with a late insurance run. He was unused in the second round as Mauer saw all the action. He had another good year with the bat in 2013, when he hit .280/.340/.455 in a career-high 147 games, with 25 doubles, 6 triples and 18 homers, driving in 82 runs. He even was successful in 9 of 10 stolen bases attempts that season, though he only threw out 22% of attempted base-stealers. He was among the 2013 NL leaders in triples (6, tied for 9th), sacrifice flies (8, 4th) and at-bats per strikeout (7.6, 8th, between Darwin Barney and Buster Posey).

Lucroy had another great season with the bat in 2014, which led to his being named to the All-Star team for the first time; he actually started the game because Yadier Molina was unavailable due to an injury. On August 17th, he collected five RBI on a first-inning homer and bases loaded double in the 2nd, both off Dan Haren to lead the Brewers to a 7-2 win over the Los Angeles Dodgers, completing a three-game sweep at Dodger Stadium that consolidated the Brewers' position atop the NL Central standings. The double was his 40th of the season (his previous season high was 25), a figure that led the major leagues at that point. His 45th double as a catcher on September 18th tied the all-time mark for doubles for the position, set by Ivan Rodriguez in 1996. He set a new mark on September 27th against Tsuyoshi Wada of the Chicago Cubs, with his 46th two-base hit as a catcher; it was also his 53rd overall - the others were hit as a first baseman - tying Lyle Overbay's team record.

He was injured just two weeks into the 2015 season, breaking a toe when struck by a foul tip in a loss to the Cincinnati Reds on April 20th. He was hitting .156 at that point, and the Brewers had not been doing any better, as they had the worst record in the major leagues at 2-11. He was reactivated on June 1st. He ended up playing 103 games for the Brewers, hitting .264 with 7 homers and 43 RBIs. With the Brewers headed into a major rebuilding, there were rumblings after the season that he was unhappy and wanted out of Milwaukee, but by the start of spring training in 2016, he had changed his tune, indicating that he was willing to endure the rebuilding process as one if the few veterans left on the team. In particular, he said that he was looking forward to working with top catching prospect Jacob Nottingham to help him become a productive major leaguer. In any case. Lucroy had a very good first half for the Brewers, putting him on the All-Star team for the second time in his career. At the end of July, he was hitting .300 with 13 homer and 50 RBIs in 94 games, and was more a more desirable commodity than ever on the trading market. On July 31st, the Brewers had seemingly worked out a deal to send him to the Cleveland Indians, who were desperate for a solid catcher to complete a playoff-bound team, but Lucroy could not get a guarantee from Cleveland about what their longer-term plans were for him and as a result vetoed the tentative deal under his no-trade clause. The following day, August 1st, he was traded to the Texas Rangers, alongside RP Jeremy Jeffress in return for prospects Lewis Brinson and Luis Ortiz. he played 47 games for Texas, hitting .276 with 11 homers and 31 RBIs to finish the season at .292 with a career-high 24 homers and 81 RBIs. In the postseason however, he only went 1 for 12 as the Rangers were eliminated by the Toronto Blue Jays in three games in the Division Series.

In 2017, Lucroy hit only .242 over his first 77 games with Texas, with only 4 homers and 27 RBIs and gradually lost playing time to Robinson Chirinos. On July 30th, he was traded to the Colorado Rockies for future considerations. In 46 games for the Rockies, he hit .310 with 2 homers and 13 RBIs. It was really a Jekyll and Hyde season, as his OPS+ went from an awful 66 in Texas to an excellent 115 in Colorado. He was the starting catcher in the Wild Card Game against the Arizona Diamondbacks on October 4th and went 2 for 3 with a pair of doubles a walk, two runs and an RBI, but the Rockies lost the game, 11-8. The Rockies tried to re-sign him with an offer of a three-year deal worth $21 million, but Lucroy turned it down to test the free agent water. This turned out to be a poor decision, as the market was terrible - not just for him - as teams were just not interested in offering multi-year deals to veteran players, with only a few exceptions. He only found a team on March 9, 2018 when he joined the Oakland Athletics on a one-year deal. He was the starter all season for Oakland, playing 126 games. He hit just .241 with 4 homers and 51 RBIs, for an OPS+ of 71, but he did work well with Oakland's patched-up pitching staff, helping them to overachieve and lead the A's to a wild card berth. He again started the Wild Card Game, going 1 for 4 as the A's lost to the New York Yankees.

Lucroy was a free agent after the 2018 season and this time had to set his sights lower given his poor season with the bat. On December 28th, he reached a deal with the Los Angeles Angels for one year and $3.35 million, with a possibility of some performance bonuses. He continued to struggle with the bat in the first half, hitting .236 with 7 homers and 30 RBIs in 70 games and also leading the AL by grounding into 15 double plays. On the last day before the All-Star break, on July 7th, he was involved in a violent collision at home plate with Jake Marisnick of the Houston Astros as Marisnick was attempting to score on a shallow sacrifice fly in the 8th inning with the score 10-10. The runner barreled into him, sending him crashing backwards to the ground with a broken nose and a concussion. He had to be carted off the field. The umpire disallowed the run as he judged that the runner had made no attempt to avoid a collision. Yadier Molina for one weighed in after the incident, saying that Marisnick should be suspended, something with which Angeles manager Brad Ausmus, himself a former catcher, agreed. On July 11, Marisnick received a two-game suspension for his part in the collision. He was activated on July 31st, but only two days later, on August 2nd, he was designated for assignment and handed his unconditional release on August 5th. He was hitting .242 in 74 games with 7 homers and 30 RBIs. He then caught a break as two days later, he was picked up by the Chicago Cubs, who had to place starting C Willson Contreras on the injured list with a strained hamstring.