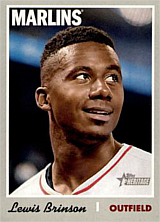 Outfielder Lewis Brinson was a first-round pick in the 2012 amateur draft, being selected 29th overall by the Texas Rangers.

In 2016, he was hitting .237 after 77 games with the AA Frisco Rough Riders when, on August 1st, he was traded to the Milwaukee Brewers alongside fellow prospect Luis Ortiz in return for catcher Jonathan Lucroy and reliever Jeremy Jeffress. He hit .382 in 23 games for the Colorado Springs Sky Sox after the trade to finish the season with a batting line of .268/.305/.468 in 104 games, with 24 doubles, 6 triples and 15 homers, in addition to 63 runs scored and 61 RBI. He returned to Colorado Springs in 2017 and was named to the United States team for the 2017 Futures Game. In 76 games in AAA, he hit .331/.400/.562 with 13 homers and 48 RBI, taking advantage of the favorable hitting environment to put up some great stats. He made his major league debut on June 11th but, in 21 games in Milwaukee, he hit just 106. Brinson was considered the Brewers' top prospect heading into the 2018 season, but on January 25th, he was traded to the Miami Marlins, alongside infielder Isan Diaz, outfielder Monte Harrison and pitcher Jordan Yamamoto for outfielder Christian Yelich, as the Brewers decided to make a major push towards earning a postseason slot. He was likely to have plenty of opportunity to get some playing time in Miami, as the Marlins traded all three of their starting outfielders from 2017 - Yelich, Giancarlo Stanton and Marcell Ozuna - in what was the latest Marlins fire sale by new team ownership. For Brinson's part, he said he was quite excited about the trade as he had grown up a Marlins fan and dreamed of playing for the team. His idol at the time was speedy outfielder Juan Pierre.

Brinson struggled mightily in his first extended look at the big leagues. In 109 games for the Marlins in 2018, he batted .199/.240/.338 with only 17 walks to 120 strikeouts in 382 at bats. He was briefly sent to the Triple A New Orleans Baby Cakes in an attempt to right the ship but was unable to break the .200 line. During the summer, the popular ESPN radio show (simulcast on ESPNU/ESPNews) The Dan LeBatard Show, based out of Miami, made a spirited but unsuccessful attempt to stuff the ballot box for Brinson to be named a National League All-Star despite his tough batting line. Brinson spent more of 2019 at Triple A, as he again flailed helplessly at big league pitching. In 75 games, he batted .173/.236/.221 with 13 walks to 74 strikeouts in 226 at bats (nearly one strikeout for every three at bats). He saw marked improvement in the shortened 2020 season, as he improved to .220/.268/.368 in 47 games. All three numbers were the highest he had posted in his four seasons - but they were also all below average, resulting in an OPS+ of 72. Still the Marlins surprised just about everyone by making it to the postseason, and Lewis went 0 for 1 with a run scored in the Fish's sweep of the Chicago Cubs in the Wild Card Series, and 0 for 5 as they were in turn swept by the Atlanta Braves in the Division Series. Following the season, he busied himself in a completely different sideline, starting a second career as a male fashion model.