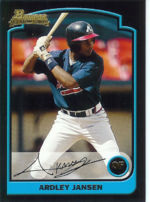 Ardley Jansen was a minor league outfielder in the Atlanta Braves chain. He showed flashes of power, speed, contact, defense and plate discipline but was never able to put it all together into a complete package. He is yth

Jansen was 4 for 21 for the 2006 Myrtle Beach Pelicans to wrap up his career in Organized Baseball.

Joining the combined Netherlands Antilles/Aruba for the 2008 Haarlem Baseball Week, Jansen went 2 for 13 with 2 doubles, a steal and 3 runs. He scored their only run in a surprisingly close 2-1 loss to the Cuban national team. He was with the Netherlands Antilles national team for the 2008 Americas Baseball Cup, when they qualified for the 2009 Baseball World Cup. Ardley was named to the All-Star outfield for the tournament. He hit .444/.467/.963 in the event with 4 homers, 8 runs and 8 RBI in 8 games. He was 4th in average, led in slugging, was 9th in OBP, tied for third in runs (one behind Gabriel Martinez and Jose Hernandez), tied for second in hits (12), tied Alexander St. Jago for third in RBI, led in homers and led in total bases (26). He failed to take home MVP honors as those went to Carlos Rivera.

Jansen played for the Antilles in the 2010 South American Games.